It’s hard to find anyone who analyzes University of Kentucky football recruiting more than Freddie Maggard .

The former UK quarterback and current Kentucky Sports Radio football analyst pours over game film of potential recruits to arrive at his own recruiting opinions that have nothing to do with the star rankings assigned by recruiting analysts.

As Kentucky coach Mark Stoops put together is 2017 class, Maggard liked it more and more.

“If the players stay committed that have said they are, then this is a different recruiting class than has signed at Kentucky before. The class is full of multiple position players that appear to love the game and love to compete,” said Maggard before the national signing period started on Wednesday. “The whole personality of the team has changed. This class has a lot of speed and playmakers on offense. This is a crucial time for Kentucky. I really think Kentucky has the depth and talent equal to its peers in the SEC East other than Georgia. Kentucky could easily contend for the SEC East next season.” 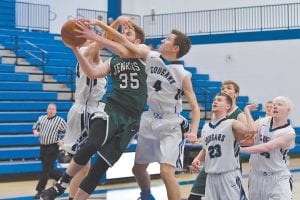 COUGARS DEFEAT CAVALIERS — Jenkins’ Dallas Simon put a hand over Letcher Central’s Tyler Boggs as Boggs looked to shoot underneath. Boggs scored 12 points in LCC’s 72-32 victory over the Cavaliers in a game played at Ermine on January 27. (Photos by Chris Anderson)

So who does Maggard like in this signing class that maybe did not rate the biggest headlines? He starts with three “Belly Shirt Hogs.” Maggard defines those players as “offensive linemen that are 6-5, 300 pounds already but have big enough abs to wear shirts under their pads.”

Those three are Sebastien Dolcine of Florida, Naasir Watkins of Maryland and Austin Dotson of Belfry.

“Sebastian Dolcine has only played three years of football. His family is from Haiti. He has long arms. The aggression is there and he really understands the game,” Maggard said. “Watkins is a former tight end who could play tackle or guard. Austin Dotson is a mauler. He has big paws (hands) and does not let go. He’s not a highly rated kid but he projects as a guard. He will get dirty inside and push people around.”

Alex King is from nearby Mason, Ohio, and is highly valued by recruiting analysts because of his pass rushing ability at linebacker. He had scholarship offers from Tennessee, Wisconsin and West Virginia when he committed to UK early and likely would have had more offers coming. 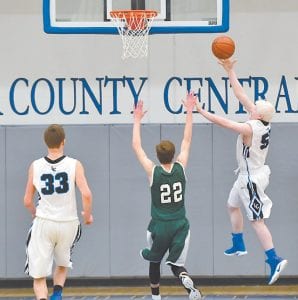 “He could factor into that Denzil Ware-Josh Allen position,” Maggard said. “He is 6-4, 235 pounds and I could see him as standup linebacker like Ware. He is an explosive edge rusher and has excellent lateral movement.”

Maggard sees him creating disruption on the field much like linebacker Jordan Jones, UK’s top tackler, did last season.

“To me, this team is taking on the personality of Jordan Jones and Alex King is one of those guys that fits that perfectly,” Maggard said.

“He’s an under the radar guy. He has that Jordan Jones type intensity, too,” Maggard said. “I love him.”

Florida defensive end Jordan Wright probably got the most attention when UK basketball coach John Calipari told him he could have an opportunity to play basketball if he signed with Stoops. The 6-5, 230-pound player is what Maggard calls a “freak athlete” with superb instincts.

“He is extremely raw but has so much natural ability. He’s very aggressive for a dual sport guy. He’s not passive at all,” Maggard said. “He will develop and I really like his nastiness. He’s still growing, too. He led his team to a state basketball championship. He actually has one of the higher ceilings of the prospects I have evaluated at Kentucky in the last five years.”

Finally, one of the early enrollees that stands out to Maggard is Ohio running back Bryant Koback.

“Kentucky was fortunate that he got injured (broken leg) during his senior year. If not, then other offers would have come in like crazy for him,” Maggard said. “He’s a highly productive player. I think he plays as a true freshman. He’s a speedster. He can catch the ball. He’s tough to tackle. He’s going to be really good.”

Sophomore Katie Reed started her UK softball career with an 18-game hitting streak and had a superb season at second base. This season she’ll be even more important for UK when the season opens Feb. 10. She’s not only moving to shortstop but she will be counted on for more offense and leadership.

Reed is no ordinary athlete. She was a 300-meter hurdle champion in high school before giving up track after two seasons. She played basketball her final two years of high school.

She played with current UK sophomore Jenny Schaper on a travel team out of St. Louis that placed fifth at the 2014 USA/ASA 18-and-under Gold Nationals in 2014.

She was also a hockey player. After moving from Tennessee to St. Louis, she finally persuaded her parents to let her play hockey.

“My parents did not really know anything about hockey but finally I convinced them to let me try it. I ended up playing in St. Louis until my junior year of high school,” she said. “I had friends in neighborhood that we would go up and play street hockey with the older kids. One of my best friends was going to learn to play hockey and I begged my parents and they let me.

“I played on a travel team, St. Louis Lady Blues, and got to go to Canada three times and some crazy places. We had a pretty good team. Everyone on my team that wanted to play in college is now playing in college.”

Could she have been a college hockey player?

“I don’t know. Maybe. I had to make that decision about which sport to concentrate on just because of the time commitment for me and my parents. I had to decide which one I had more passion for and I went with softball,” she said.

Ohio quarterback Danny Clark was one of seven midseason enrollees at Kentucky and is now one of six quarterbacks on the Kentucky roster.

Clark, a one-time Ohio State commit, led Archbishop Hoban to consecutive Division III state titles and completed 117 of 213 passes for 2,122 yards and 15 scores as a senior.

In his short time at Kentucky, Clark said the person who has been the biggest help to him is Drew Barker, last year’s starting quarterback until he suffered a season-ending back injury.

“Drew is such a helpful person. Every time we are throwing routes on air, he is telling me what happens and what to look at,” Clark said last week. “I am very fortunate to be in that position with him. Sometimes you come in here and everybody is out to get you. Drew is not like that. He is a great person, and a great football player. I am just trying to learn as much as I can from him.”

Teammates have already learned one thing about Clark — he’s outgoing and has a contagious personality.

“He’s the most energetic person I’ve ever known,” Ohio running back Bryan Koback, another early enrollee, said. “He’s always smiling. He wakes up that way and probably smiles when he is sleeping. He’s so focused on becoming the best player he can possibly be. Everybody can feed off that positive energy.”

Kentucky basketball fans did set a Guinness World Record for the loudest noise level during the Kansas game Saturday — and before Kansas got the lead in the second half.

However, that was not the best part of having ESPN GameDay in Lexington again.

During the ESPN Game- Day show, Calipari made a 10-minute appearance in Rupp Arena where about 4,000 UK fans cheered.