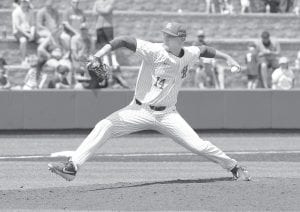 Zack Thompson set a single-season strikeout record with 130 and is expected to be at least a top 20 pick in the Major League Baseball Draft. (UK Athletics Photo)

Former Kentucky basketball player and assistant coach Reggie Hanson has kept up with college athletics since getting out of coaching in 2014 and has remained “invested” in college basketball.

He’s also seen the high number of Division I athletes transferring each year and how the number continues to grow.

That was part of the inspiration for writing his book, “10 Life Lessons: Learned as a Student- Athlete.”

“Players get out of college in four or five years and they are still not ready for real life,” said Hanson, who scored 1,167 points during his UK career from 1987-91 before later spending seven seasons on coach Tubby Smith’s UK staff. “All the things they learn in athletics do not always transition to real life for different reasons. The more I saw that, the more I felt I needed to write this book to help young people understand that college can translate to real life.”

He knew he had to be able to write what would relate to college and/or high school students to “grab their attention” so he could help them.

“I took my experiences at UK as a player for Rick Pitino the last three years and how each experience translated to real life,” Hanson said.

That’s why the book has 10 lessons/ chapters and each is a real life experience that Hanson had where he could show how that translated to real life. The chapters include perseverance, overcoming adversity, leadership, mental toughness, organization and time management, preparation, trusting the process, personal authority, sacrifice, communication, discipline and more.

“I give some funny stories to things that happened to me to make the book more interesting,” Hanson, who briefly played in the NBA and then seven years in Japan as a player and coach, said.

His book is also for coaches because he feels they need to having more “teaching sessions” with player about real life.

“Why not talk about how scouting reports transition to the business world when you are doing a presentation? If you do not do the right scout, you lose the game. If you don’t get the presentation right, you might lose your job,” Hanson said. “I am not putting blame on coaches. Most are on a short leash and have to develop players, succeed and win games. I just want to bring back a reminder about how are they doing with helping players get ready for real life.”

Hanson got out of coaching in 2014 and tried several jobs in the business world before finding one he enjoys — he’s a manager at Dillard’s, a successful retail chain in Tampa.

“So many different people reached out to me after I got out of coaching because they understood in the corporate world you have to develop skills with your employees just like a coach does with his players,” Hanson said.

Hanson says his book is geared to help show what college athletes will go through and it can help high school students as much, or maybe more.

“For high school kids, it might be an even better read because it will help them know what to be prepared for in college. Most have no clue what they will be going through. I know I didn’t. This book will help give them a leg up but it really will help anybody who just wants some life lessons they can use,” Hanson said.

“The people who have bought it so far have given me nothing but great feedback. It’s an easy read but you’ll get a lot out of it.”

Actor Josh Hopkins first met Hanson when he was a Lexington high school student and Hanson was playing at UK. The two have remained friends and Hanson said the actor was one of the first people to buy the book.

“When I saw he was releasing a book I knew I had to read it and I’m so glad I did,” Hopkins, one of the stars of the current ABC-TV show “Whiskey Cavalier,” said. “It should be must reading for student-athletes in high school or college and the lessons are easily relatable to situations in the professional world whether it be sport or otherwise. It’s a short read with excellent advice and Reggie has a welcoming voice that manages to teach without seeming preachy.

“He also throws in these side stories where he gives examples from his life and career and there is some fantastic behind the scenes info that any Cat fan would love to learn about that era of UK basketball.”

Hanson hopes to set up a book signing tour in Kentucky soon. Until then, Hanson suggests going to Amazon.com, type in his name and information on the book will appear.

What did getting a verbal commitment last week from Michigan lineman Justin Rogers, the 10thrated player in the 2020 recruiting class by Rivals.com mean for Kentucky and coach Mark Stoops?

“It offers a lot of credibility to the coaching staff on the recruiting trail,” 247Sports recruiting writer Josh Edwards said. “When a player that could have gone anywhere chooses to play out of state for a program, others take notice.

“Since Rogers’s announcement, there has been a lot of social media interaction from Kentucky targets. It is a smaller class expected this year so it will be interesting to see how the coaching staff handles the numbers.”

Edwards knows Kentucky’s 10-win season is resonating with recruits and Rogers’s commitment shows a whole new national level of respect for Stoops and his program.

“Rogers’s relationship with (UK freshman) Marquan McCall cannot be understated in his recruitment. It was not long ago that legacy recruits like Zack Martin, Russ Yeast, Nick Martin and Zeke Correll were committing to other programs,” Edwards said. “The aesthetic of landing a Michigan recruit over Michigan and Michigan State builds respectability.”

Rogers’s mother, Joya Townsel, told the Detroit Free Press that she “liked Georgia” best. She also said it was easy to understand why he did not pick home-state Michigan. She said other schools “reached out” to her son more than Michigan did.

“I think that’s where schools go wrong, when they don’t reach out to these kids and show they’re really interested in them. I believe that played a part. Justin used to always go up there and visit and watch their games,” she told the Detroit newspaper.

The biggest shock was that she also said she never spoke to Michigan coach Jim Harbaugh or anyone on his staff. Kentucky recruiting coordinator Vince Marrow emphasizes constantly the value of building relationships with parents and family members.

Kentucky junior pitcher Zack Thompson earned second-team All-Southeastern Conference honors and is also a semifinalist for the Golden Spikes Award and Dick Howser Trophy, which are both given to the nation’s top player.

Thompson had a sensational season for a young Kentucky baseball team that way too often had to depend on him to get the only win in a three-game SEC series. He went 6-2 with a 2.40 earned run average in 14 starts. He threw a workhorse 90 innings and struck out 130 — he ranked 11th nationally with 13 strikeouts per nine innings — while walking just 34 and giving up 59 hits.

He’s only the 14th UK pitcher to have 200 career strikeouts and finished with 268, third best in school history. His 130 strikeouts were a single season record for a southpaw.

Most expect him to be a top 20 pick in next month’s Major League Baseball Draft. Several scouts have told me he was the SEC’s best pitcher and they believe he could end up being a top 10 pick, which is pretty amazing considering UK did not even make the 12-team SEC Tournament this season.

Connections of all kind can make a difference when it comes to the NFL draft just like it did for UK offensive lineman George Asafo-Adjei when the New York Giants picked him in the seventh round earlier this month.

Turns out that Giants offensive line coach Hal Hunter’s son works in the Kentucky football office and told his father about Asafo-Adjei’s work ethic and character.

New York general manager Dave Gettleman told media members the team had the UK lineman graded higher than a seventhround pick but had some concerns about technical issues.

“He is a rookie and you have to tell him to do something once and he goes on and does it right the next time. He picked up the offense much quicker than I thought he was going to,” Hunter said about Asafo- Adjei. “When you compare our offense to their offense, we have a lot more volume to it with a lot of the things that we were doing.

“We need to continue to work with him technically to get him up to speed but you have to like everything about him.”

Hunter liked that Asafo- Adjei verbally committed to UK early and kept his word even when he got offers from bigger schools. The Giants liked how he stuck to his commitment.

Asafo-Adjei will get a chance to compete with third-year pro Chad Wheeler for the starting right tackle position. Pro Football Focus had Wheeler ranked as one of the worst tackles in the NFL last season.

Quote of the Week: “I want them to keep disrespecting us because it drives us. We don’t look for them to motivate us but it just makes me mad. It really does,” Kentucky football recruiting coordinator Vince Marrow on the lack of respect for UK in 2019 preseason polls.

Quote of the Week 2: “He has good size but is not the most athletic guy in the world. He will have to improve his ball handling and shooting to make an impact long term. He will also have to get a little stronger. He most likely won’t be anything more than a role player. He will have a lot of developing to do,” USA Today NBA draft capsule on Kentucky sophomore PJ Washington.

Quote of the Week 3: “You don’t work this hard to try to establish yourself and build some trust and credibility and then up and just give it up and let somebody else walk into it and leave it. That’s just not how I roll; that’s now how I’m built. … I hope this is my last college coaching job. I’ve got plenty left in the tank,” Bruce Pearl, the SEC’s third-highest paid and third-longest tenured coach, on staying at Auburn.