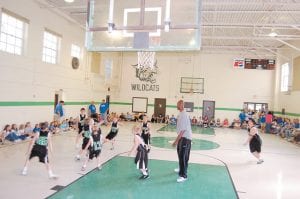 TEACHABLE MOMENT — Jules Camara, who played basketball at the University of Kentucky from 2000 to 2003, scrimmaged with the middle school team at Arlie Boggs Elementary School last week while members of the student body looked on. (Photos by Sally Barto)

Camara, who played basketball at UK from 2000 to 2003, volunteered his time to shoot hoops with students, give a motivational speech, and sign autographs.

Camara agreed to come to Letcher County after Dale Jackson, of Partridge, took his son, Hunter, to a basketball camp hosted by UK Coach John Calipari this summer. Camara, who helped out with the camp, became friends with Jackson, who asked Camara if he would visit his son’s school.

Camara’s appearance at the Eolia school on Friday marked his first time visiting a school. The 6-11 forward from Senegal told the student body of 130 to stay in school, respect family members, stay humble, and to be thankful. Camara said it was a “tremendous opportunity” for him to spend time with students and noted the beauty of Pine Mountain. 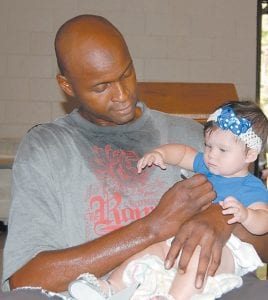 Former University of Kentucky basketball player Jules Camara autographed the shirt of seven-month-old Maggie Little on Aug. 27. Maggie is the daughter of Phillip and Beth Little of Whitesburg.