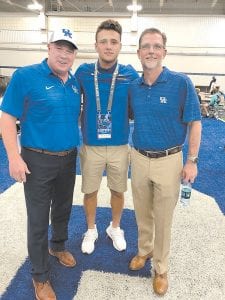 Nik Scalzo knows UK has had previous quarterbacks flip their commitments but says he will not follow that path no matter who tries to recruit him now. (Twitter Photo)

Since he first saw him at a quarterback challenge camp as an eighth-grader, Drew Phillips has felt that Nik Scalzo had unique abilities that most quarterbacks do not have.

“He’s a great kid. Works extremely hard on the field. He’s humble but confident in his ability,” said Phillips, owner/director of the Phillips Quarterback Academy. “I have had the opportunity to watch him develop and grow.”

He had numerous Division I scholarship offers, but many major schools have been hesitant to offer because he’s 5-11 and not 6-3 or taller. Phillips has debated with college coaches numerous times that Scalzo has more than enough size to succeed in college. 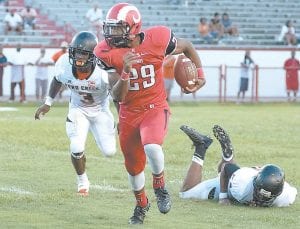 “Nik is a unique talent. He understands what it takes to win and is determined to show everyone he has what it takes to be the best,” Phillips said. “His ability to move around the pocket while keeping his eyes downfield is as good as I have seen.

“He also does a great job of protecting the football, not allowing other teams the opportunity to gain extra possessions. He can spin it with the best of them. He plays in South Florida, so he has already competed against some of the best talent in the nation … many guys committed to other SEC schools … and he has success doing so.”

Scalzo was ready to verbally commit to UK after offensive coordinator Eddie Gran told him he was one of UK’s top prospects. However, Gran told him to make sure while he also talked with the other UK coaches.

“He called later and said he would love for me to commit, so I did,” Scalzo said. “I’ve always dreamed of playing for a Power Five school, especially in the SEC. I worked so hard to get this type of offer. I knew I wanted to come to Kentucky because all the coaches treated me like family. My parents are even more excited than me about this.”

Scalzo won’t forget those who have doubted him because of his size.

“Quarterbacks my size are playing Division I football and the ones that do have a chip on their shoulder and work even harder,” Scalzo said. “Kentucky knows what they are getting with me and wanted me. Drew told me when we first met that it’s not size but heart that matters. There a bunch of 6-4, 6-5 quarterbacks playing in college and I can do exactly the same things except I have a chip on my shoulder to show I am better.”

Kentucky’s coaches have had a terrific knack for identifying young quarterback talent. First it was Florida quarterback Mac Jones, who switched to Alabama after first committing to UK. Next it was Georgia quarterback Jarren Williams, who committed to UK but then changed to Miami.

“I think Kentucky did a great job of evaluating how talented he is,” Phillips said. “All you need to do is turn on the film to realize the kid is talented. I’ve been in several disputes with other schools about him (Scalzo) and the only thing they don’t like about his game is his size. You see what Baker Mayfield and Johnny Manziel were able to do (in college winning the Heisman Trophy), and I believe Kentucky sees that same magic in Nik.”

Scalzo points to New Orleans Saints quarterback Drew Brees, who is listed as 6-0 and has thrown for over 70,000 yards and nearly 500 touchdowns, as proof that a quarterback doesn’t have to be 6-4 or bigger to succeed even in the NFL.

“I have always been one of the shorter quarterbacks. I am playing in South Florida against Division I talent all the time. I deal with great players every year,” Scalzo said. “I have had to develop my vision and also use my body to get out of trouble. I also like to think I am pretty smart. I can read a defense before the play happens and know what coverage they are in. I take a lot of pride in my pre-snap reads. Last season I didn’t have an interception until week nine, then I threw three in one game.”

He watches film daily. Normally he’ll watch film an hour before school and then watch more after practice. His coaches have taught him it is a “necessity” to know who he is playing and how to overcome what they do.

He’s not sure if he will be able to enroll early at UK or not. His high school does not have early graduation even though he will have enough credits in December to graduate.

“I am trying to find a way to work around it,” Scalzo said. “I would really like to do it (enroll early).”

But could he flip if he has a big summer or senior season and other schools come after him like they did Jones and then Williams?

“No sir. That’s not me. I stay true to my word. I don’t care if Alabama or anybody else comes knocking. Nothing’s going to change my mind about Kentucky,” Scalzo said. “I am not going to do what these past quarterbacks have done these last few years. Kentucky has been recruiting me since I was a freshman and I respect that. I know Kentucky has had quarterbacks flip, but I am not doing that.”

Kentucky commit Ashton Hagans has the size and physicality to play at Kentucky next year if the Georgia guard decides to reclassify to the 2018 recruiting class.

“He’s definitely an elite defender. He’s really quick laterally and he’s scrappy and tough,” McDonald said. “He takes pride in locking down the other team’s primary ball handler, but I’ve also seen him switch off to a wing if it’s a player that’s giving his team problems. He’s a versatile defender because of his size.”

Hagans was originally a Georgia verbal commitment before coach Mark Fox got fired and he re-opened his recruitment. It didn’t take long for Hagans — who said he watched John Wall and Isaiah Briscoe play at Kentucky — to say yes to Calipari.

“He’s just such a good passer and such an unselfish player. He’s looking to generate offense for his teammates before he takes care of himself,” McDonald said. “And just as important, he has a weird ability to see plays develop before they actually happen.

“There isn’t really one thing he’s done lately to impress me more. He just continues to get better all the time and every team he’s on wins at a high level in large part because of him.”

It’s no surprise that Kentucky football commits Nik Scalzo and Jake Pope know each other since they both are from Fort Lauderdale.

Scalzo, a quarterback, and Pope, an offensive lineman, are now part of Kentucky’s 2019 recruiting class. They are not on the same high school team, but they have been teammates before.

They were on seventh- and eighth-grade teams at Broward County that won national championships. Now they will be reunited at Kentucky for the 2019 season.

The NBA Combine always produces a few interesting numbers and did so again last week.

Kentucky recruiting coordinator Vince Marrow certainly is making his presence known in the Bluegrass since taking over as lead recruiter in Kentucky like he had been for Ohio since his arrival at UK with coach Mark Stoops.

Doss defensive end Shawnkel Knight-Goff verbally committed to UK last week. Knight-Goff also played running back at Doss last year and had scholarship offers from Louisville, Purdue, Cincinnati, Indiana and others. Knight- Goff was at UK’s Blue-White Game in April and had also made other visits to Kentucky.

Marrow is also making a big push in Louisville with running back Aidan Robbins of Manual, defensive end J.J. Weaver of Moore and athlete Milton Wright of Louisville Christian. Wright has an offer from Alabama among his list of big-time schools while Weaver has Georgia, Miami and many other offers as well. Robbins has over 20 offers, including four in the Southeastern Conference.

Robbins said Marrow has made it clear to him that he’s a recruiting priority just like Weaver and Wright also are.

“I grew up with all these guys,” Robbins said. “Coach Marrow really likes us all a lot. He really wants us all of us at Kentucky and has made that clear to us.”

Robbins wasn’t surprised that Knight-Goff committed to UK. He said the two had been talking about it for weeks.

“That is my buddy. He is a freak of nature,” Robbins said about Knight-Goff. “Kentucky got a good one in him. He’s 6-4, 210 and can move. He plays basketball and runs track. He’s fast, big and strong. He’s really good. I have known him since about sixth grade. It doesn’t surprise me he did it. I just didn’t think he was going to commit this soon.”

Quote of the Week: “I am retired and suffering with my hips and other parts of my body. I am 55 and it’s all related to football but if I had to do it again, I would do it again. I loved it,” former UK and NFL running back George Adams on his health today.

Quote of the Week 2: “It’s a huge opportunity for me and my family. I just want to give it a shot. Quite frankly, I grew up watching the Steelers and I’m excited to be here. I am ready to keep on learning and getting better every day,” former UK linebacker Courtney Love on being in Pittsburgh’s rookie camp.

Quote of the Week 3: “This year there were a lot of really awesome kids in state. Obviously we can’t take them all but there are some special kids in this state. There is always good quality at the top. The depth changes year to year but the high school coaches in the state do a great job developing kids,” Louisville assistant women’s basketball coach Stephanie Norman.