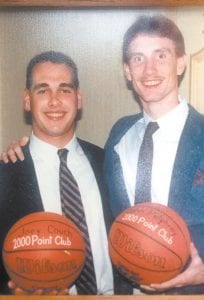 John Pelphrey, right, Joey Couch were Paintsville High School teammates and then both athletes at Kentucky at the same time. Pelphrey said that “everybody loved Big Joe.”

John Pelphrey knows he’s led a blessed life – but he does have one major regret that likely will never go away.

He was Mr. Basketball in 1987 after leading Paintsville to the state tournament. He signed with Kentucky and coach Eddie Sutton before the program was hit by NCAA probation. He became one of “The Unforgettables” for new coach Rick Pitino. He played in 114 games at UK and averaged 11.5 points per game. He was part of that epic overtime loss to Duke in the 1992 NCAA Tournament East Region final.

He was an assistant coach at Oklahoma State, Marshall and Florida before becoming head coach at South Alabama and then Arkansas. After being let go at Arkansas, he returned to Florida as an assistant and the last two years has been an assistant at Alabama.

When Joey Couch, his former Paintsville teammate and longtime friend, passed away in December, he was unable to attend the funeral because of his work schedule.

“I was coming home from watching my daughter play and (former Paintsville) coach (Bill Mike) Runyon called. I knew it wasn’t something good for him to be calling,” said Pelphrey. “Even now, it’s hard to believe. Just a lot of emotion, sadness, heaviness.

“Everybody loved Big Joe and he loved everybody. Every tournament that we used to play in, he would get the sportsmanship award and I was always wondering why that was, so I started paying attention. He would knock people down all the time. He was a football player, a rough and tumble guy. But every time he knocked somebody down he would pick then up and say, ‘Are you okay buddy?’ That’s just Joey.”

Couch came to Kentucky to play football. He was not a priority recruiting target for Kentucky but became an all-SEC lineman.

“The experiences that we had together, it’s hard to explain. Paintsville wasn’t a basketball school. To be able to stay together and to accomplish the things we did together … you know Joey scored over 2,000 points in high school. He had over 1,000 rebounds. When Joey came to Paintsville he was as good or better than any of us,” Pelphrey said. 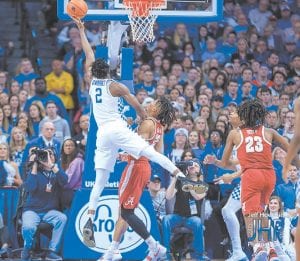 Jarred Vanderbilt has to prove to NBA teams he can stay healthy for a year and former UK All-American Mike Pratt thinks returning to UK would do that and boost his 2019 draft status. (Vicky Graff Photo)

“There is so much where our lives are intertwined. It’s probably the first time for me, and we all experience death, but that was traumatic.”

Pelphrey struggles to explain what made Couch so special to him. Couch was the only one allowed to call Pelphrey “Big Red” because of his red hair. Pelphrey never let anyone else get away with calling him that.

“Just never had to question where he stood with you when it comes to being a friend or loving and caring about the (Paintsville) Tigers or the Wildcats.” Pelphrey said. “You lose somebody like that, it is just hard to put into words what it is.

“Somebody told me a story and I had forgot about it, but Joey used to carry a bag of dog food around in the back of his car and if he saw a stray dog he would give it a handful of food. He just had an unbelievable heart. If he saw you coming it was going to be a hug and huge smile. That big heart never changed.

“ You are going to be hard pressed to find anybody who crossed paths with the guy who didn’t have a similar story or feel the same way. Just a great, great loss. We will never get over it. A lot of us will be able to learn to deal with it, but that is something you never get over.”

Couch had some personal struggles in his life but had put his life back together. He moved back to Paintsville and his friends were thrilled with how he had progressed when he suddenly died at age 49 of a heart attack.

“We all have a story and all stuff to deal with. He battled through some stuff just like we all do. He had actually tracked my dad down and helped him with some insurance,” Pelphrey said. “My dad needs the insurance … he needs to stop driving but that is another story. But Joey was just always kind and helpful to the very end. That’s just who he was.

“I think we all have things we want to accomplish and things we want to do and sometimes that gets outside out of relationships unfortunately. But the true measure of the man … the way people would look at him, feel about him. His riches were great. We miss him and that’s never going to change.

Freshman Mallory Peyton of Madisonville will be playing in her first NCAA Tournament for Kentucky this week, but coach Rachel Lawson is not worried about her being overwhelmed.

Remember, in UK’s final home series, she hit a grand slam home run in game one and then a three run shot in game two to help UK beat then No. 12 South Carolina.

“I think Mallory has a lot of confidence. She is a gamer and has been in a lot of big game situations both in high school and travel ball,” the UK coach said. “She always gives you competitive at-bats.

“I don’t worry about her confidence level at all. If she is calm and sees pitches, then you see great results from her. She is somebody I feel really good about when she is in the (batter’s) box.”

She’s hitting .232 with seven home runs. She has knocked in 23 runs in 46 games and has started 30 games going into this week’s NCAA Tournament play.

“I have pretty high expectations for Mallory. I have seen her do so many incredible things in so many high-pressure situations. I think she is just scratching the surface. She has a bright, bright future in the SEC,” Lawson said.

Former University of Kentucky All-American Mike Pratt played professional basketball and also coached at that level. He has numerous NBA contacts today and through his job as analyst for the UK Basketball Radio Network he’s able to evaluate UK players not only in games, but also in practice.

Jarred Vanderbilt is one of three UK players who put his name into the NBA draft but did not hire an agent to leave a path where he could return to UK for a second season.

Because of injuries, he played in just 14 games last season but averaged 5.9 points, 7.9 rebounds and 1.0 assists per game while shooting 42 percent from the field.

“Vanderbilt is set up physically to play in the NBA, but he has got to redo his whole shot,” Pratt said. “He’s fun to watch play and I love his effort. He can really rebound. He seeks the ball and rebounds in and out of his zone.

“The downside to him is how bad are his wheels. If I was a NBA team, I would not guarantee him money but would sign him with some clause about his wheels.”

Those wheels went bad at times both of Vanderbilt’s final two high school seasons. In the last three years, he has not played a full season because of various leg injuries.

“He has to fight that health issue. That takes a lot of luster off a guy who could come back to UK and maybe move himself into the first round (of the 2019 draft),” Pratt said. “Even with his shot because of his defense, rebounding and the way he shares the ball he can move into the first round if he shows he can play a full season. But the NBA plays a lot more games than you do in high school or college. He has got to show he can stay healthy.”

Rachel Lawson is a coach who always has high expectations for her softball players. That’s why she can only recall one player in her 11 years at UK exceeding her expectations. That was outfielder Bailey Vick of McCracken County last year when she was a freshman.

“She was not somebody I expected all of that from. She was so academic oriented, I was not sure what direction she would go. She decided to come to UK late and we weren’t sure what would happen,” Lawson said.

“She had an outstanding year last year and she has been an anchor for us in the outfield. I think Bailey Vick is probably the one player over the last 11 years at Kentucky that exceeded my expectations last year.”

“Now this year she has not exceeded them,” the coach laughed and said. “She was a well kept secret for a while. I was really proud of what she has done and now the bar has been raised for sure.”

She was recently named to the academic all-district team with a 4.0 grade-point average while majoring in accounting.