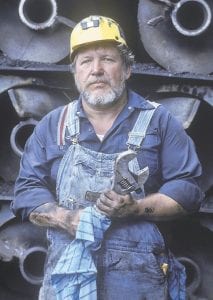 This 1987 file photo shows former United Mine Workers of America President Sam Church as he posed for a photo after leaving office as the UMWA president. Church died Tuesday at age 72. (AP Photo/The Bristol Herald-Courier)

Sam Church, former leader of the United Mine Workers of America, died early Tuesday after a long illness, the union announced.

“This is a very sad day for the UMWA family,” Cecil Roberts, the union’s international president, said in a statement.

A native of Matewan, W.Va., Church began working in the mines in 1965 at Clinchfield Coal Co. in southwest Virginia.

He quickly rose through the local union ranks and joined UMWA’s headquarters staff in 1975.

When Arnold Miller resigned for health reasons in 1979, Church became the union’s international president, a job he held until 1982.

Roberts said Church worked to improve conditions for miners and their families.

“UMWA widows have a pension today because Sam won that benefit at the bargaining table,” he said. “He stood tall for miners afflicted by the scourge of black lung disease and insisted that they receive compensation for their illness.”

Church also insisted that mine operators and the federal government take action to reduce miners’ exposure to the dust that causes black lung, Roberts said.

“Sam never stopped fighting to restore the right to organize, for better health care for working families and pensioners and for safe and healthy workplaces,” said Daniel J. Kane, the union’s secretary treasurer.