Exchange leads to trip to France 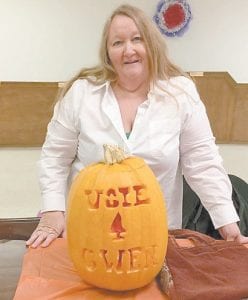 I am honored, humbled, and ecstatic as I prepare to go on my greatest adventure to date. I want to share this wonderful news with you and to share a little of how I believe this kindness to my community and me came about . . .

I was a part of a cultural exchange with another group in our great country that votes completely differently from most of us. They and we wanted to understand each other’s reasons for voting as we did. We have visited each other and while they were here we went to visit Portal 31. After taking the tour I was overcome as I thought about the sacrifices and the bloodshed of my own family and mining families all over these mountains. I was standing tearfully looking at the pictures and information on the walls outside the portal when who should appear beside me but one of the women from the cultural exchange. I was astounded to learn that she had a coalmining grandfather who had been a child miner like the iconic photograph outside the portal.

Anyone raised in the coalfields knows the kinship of coalmining families who are really no blood relation. We often say it’s the coal dust in our veins. It’s the solidarity of folks striving for a better life united in that struggle. Immediately that bond with her was ironclad as far as I was concerned. She was one of ours from that moment on.

Over the course of the weekend there was lighthearted banter with my questioning her about French bread, wine, and charming Frenchmen. She spends part of her year in France and works with French young adults and Americans and her nonprofit does cultural exchanges. At one point, she mentioned how marvelous it would be if a French baker were to come and work with us at Black Sheep Bakery. The thought of that was enthralling. It was a thought beyond imagination. I loved that my new friend could think bigger than I had ever been allowed to think.

Alas, the visit was soon over and our guests returned home and I thought the whole idea of the collaboration with a French baker was over. Such a nice thought . . .

Lo and behold, I got an email from her saying that she was crafting a document for the French government and the U.S. Department of State asking for a scholarship for me to travel to France to work with a French baker for two weeks. In the document, she wanted me to tell my story. This is the resulting request . . .

“Gwen Johnson is a community volunteer and lover of Appalachia. She grew up in a coal camp near where she lives today and coalmining is part of her heritage. Illiterate when she graduated high school, she taught herself to read when she read to her children. Her immense energy and drive then drove her to acquire a bachelor’s degree in Psychology and Human Service from the University of Pikeville, in Pikeville, Kentucky and a Master of Arts in Health Arts and Sciences from Goddard College. With those skills, she and a few others decided to roll up their sleeves to help the community, which is struggling economically from the coal bust. When the mine owners moved out, they left a lot of unemployment and heartache behind. From a sprout of an idea, Johnson developed a catering/bakery venture to help reinvigorate the economy in her local area. She recently received a $15,000 grant to fund the installation of an old-style brick oven. Johnson is a strong believer in second chance employment and staffs her non-profit enterprise accordingly.

“She would love the opportunity to go to France and work with a French baker in the small town of Collobrieres, a community not unlike the size of her own. Through her association with Appalshop and the Culture Hub, which are working to revitalize communities in Letcher County Kentucky, she met a woman that works in France and the United States to bring together people from differing cultures. Everyone associated with the project will donate his time and expertise to capture this exciting French/United States crosscultural exchange on film. The film will feature the making of the baguette and other tasty bread products at the heart of French culture and illustrate through bread baking that cultural stereotypes and misunderstandings can be overcome, new skills can be shared cross continents, and those in Appalachia can appreciate what France has to offer the United States and those in modern day France can learn about the ethos of an important part of America.”

A few weeks later, after my expired passport was renewed, I received an email with a plane ticket attached. I am going to France on scholarship.

We, at Black Sheep Brick Oven Bakery, are on a quest to regain arcane knowledge on ancient breadmaking techniques and ingredients. We believe the knowledge was lost to the descendants of the immigrants who came from all parts of the world to these mountains. Because of the roughness of the terrain and the climate, grains that can be milled into flour have not been grown here much. Corn became the mainstay and the baking techniques were gradually forgotten. In the industrial age even the flour that was available was not a good pure flour.

As I prepare for this journey, I wanted to share that we have gathered knowledge of baking for our team and myself through a $1,000 grant for tuition from the Mountain Association for Economic Development. We are thankful for the grant.

I then used my John C. Campbell Folk School gift certificates my children have been giving me for the last few years for Christmas on a weeklong baking class in North Carolina. I came home with recipes worth their weight in gold and new knowledge to share with the other Black Sheep staff and our community.

We, the Black Sheep, believe this bakery project has been blessed by the Divine. We also know that there are forces both flesh and blood and spiritual that want us not to fail at this attempt to make a better community and lift some out of the ashes of despair and devastation. I, myself, see this trip to France as one of the divinely inspired pavers for progress in the craft of bread making and community building.

Black Sheep Bakery is gaining footing one piece of equipment, knowledge, and recipe at a time. We share with the community by offering them to bring their bread dough to bake in the community brick oven on equinoxes and solstices. We plan to offer bread-making classes to our community when I return from France as a way to pay it back and also to pay it forward.

To whom much is given, much is required. I am so thankful for what I am about to receive and I promise so solemnly to repay in-kind.

On behalf of Hemphill and myself we thank all those responsible in reaching out to have a dialog with those of different politics. Thereby our horizons have been and are about to be broadened exponentially.

In ancient times if a fire died out on a home hearth a runner was sent to the nearest homestead for a shovel of coals to ignite a new fire. You might have heard a mountain phrase said to a visitor in haste to leave . . . “What did you come after? A shovel full of fire?” That phrase originated from that practice. Hopefully, I will carry priceless coals of knowledge. They will be tenderly nurtured and carried back from France to ignite the hearth at home.