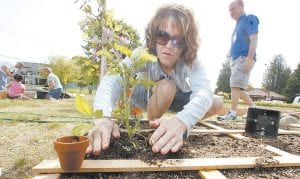 Nicole Wells, photographed working in a community garden at a church in Sherwood, Oregon, now has another good reason to exercise: It may help prevent kidney stones. You don’t have to break a sweat or be a super athlete, either. (AP photo)

Women have another reason to exercise: It may help prevent kidney stones. You don’t have to break a sweat or be a super athlete, either. Even walking for a couple hours a week can cut the risk of developing this painful and common problem by about one-third, a large study found.

“Every little bit makes a difference” and the intensity doesn’t matter — just getting a minimum amount of exercise does, said the study’s leader, Dr. Mathew Sorensen of the University of Washington School of Medicine in Seattle.

About 9 percent of people will get a kidney stone sometime in their life. The problem is a little more common in men, but incidence has risen 70 percent over the last 15 years, most rapidly among women.

Obesity raises the risk as do calcium supplements, which many women take after menopause. A government task force recently advised against supplements for healthy older women, saying that relatively lowdose calcium pills don’t do much to keep bones strong but make kidney stones more likely.

The new research involved nearly 85,000 women 50 and older in the government funded Women’s Health Initiative study. All had an exam to measure weight and height so doctors could figure out their body mass index, a gauge of obesity. They also filled out annual surveys on what they ate, so researchers could take into account things known to lower the risk of kidney stones, such as drinking a lot of fluids and eating less salt or meat.

Participants said how much exercise they usually got and that was translated into “METs” — a measure of how much effort an activity takes. For example, 10 METs per week is about 2-1/2 hours of walking at a moderate pace, four hours of light gardening or one hour of jogging.

After about eight years, 3 percent of the women had developed a kidney stone. Compared to women who got no leisure-time exercise, those who got up to 5 METs per week had a 16 percent lower risk for stones. The risk was 22 percent lower with 5 to 10 METs per week and 31 percent lower for 10 METs or more. Exercise beyond 10 METs added no additional benefit for kidney stone prevention. Exercise intensity didn’t matter — just how much women got each week.

“We’re not asking people to run marathons. This is just a very mild to moderate additional amount of activity,” Sorensen said.

Why might exercise help? It changes the way the body handles nutrients and fluids that affect stone formation. Exercisers sweat out salt and tend to retain calcium in their bones, rather than having these go into the kidneys and urine where stones form. They also tend to drink water and fluids afterwards, another plus for preventing stones.

“ There’s something about exercise itself that probably produces things in your urine that prevent stone formation,” said one expert not involved in the work, Dr. Kevin McVary. He is chairman of urology at Southern Illinois University School of Medicine in Springfield, Ill., and a spokesman for the urology group. “It’s not just being skinny or not being fat, it’s something about the exercise that protects you.”

Exercise is known to cut the risk of heart disease, diabetes, high blood pressure and other conditions that raise the risk of kidney stones. Next, researchers want to study men and younger women to see if exercise helps prevent kidney stones in them, too.