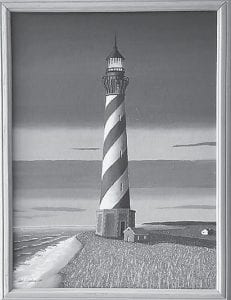 Many students young and old learned to express themselves artistically with lessons from Father Edward Randall at the St. George Catholic Church in Jenkins. A 12” x 6” oil painting of Cape Hatteras Lighthouse by Jenkins artist Ked Sanders is typical of Father Randall’s student’s work.

The Cape Hatteras Lighthouse located on the outer banks of the town of Buxton, N.C. was built in 1870 and at 193 feet is the tallest in the United States. The iconic lighthouse built of brick and painted with its distinctive black and white candy striped, spiral design is visited by approximately 200,000 visitors each year. Originally the lighthouse was built 1,500 feet from the shoreline but by the end of the 20th Century erosion had brought the shoreline approximately 100 feet from the foundation. In what was called ‘The Move of The Millennium’ the lighthouse was moved approximately 2,900 feet inland. The project was funded by a $12 million grant from the National Park Service.

Former students of Father Randall are invited to exhibit not more than two of their paintings at the Jenkins Library for through July 20. Because of limited space smaller paintings are preferred. Participants should bring their own easels if they have them. Artists must identify their paintings and they may be picked up, Monday, July 22. For additional information, call the Jenkins Library at 832-4101 or Ked Sanders at 832-4122.