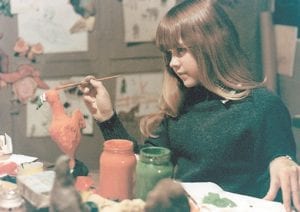 Linda Blair in ‘The Exorcist.’ (AP)

They’ve scared up something new for fans of “The Exorcist.”

“While we were filming the picture, Owen Roizman, the cinematographer, had a handheld camera,” Friedkin recalled. “He was recording various things that happened during the preparation, during the makeup tests, during the manifestation techniques.”

Roizman’s footage shows then 13-year-old star Linda Blair at ease and then at work, giving a performance while often strapped to an array of uncomfortable specialeff ects contraptions.

“One minute she’s smiling, laughing, acting like a 13-year old, and two seconds later, she’s into the character,” Roizman said.

“I really do think they put in some other things for the substance, the texture,” Blair noted. “The smell was beyond foul.”

To prepare the original footage for Blu-ray release, Friedkin said he spent months poring over the film, frame by frame. Only when that was done, did he sit down and watch the movie for the first time in “a long time.”

“It worked for me, after 38 years,” Friedkin said. “I think it has great power.”