Expect bears to be searching for food 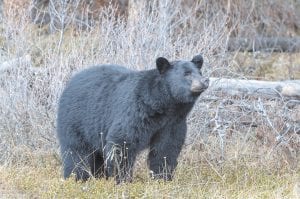 Black bears will be coming out of hibernation in Letcher County and looking for food at any time now.

After more than two months of inactivity, black bears will begin looking for food, said Jayson Plaxico, a Kentucky Department of Fish and Wildlife biologist.

“Some bears, especially females having cubs, can experience a short period of true hibernation in Kentucky,” said Plaxico. “Other black bears can stay active all winter, be awake, but not move very much. Either way, when late March and April arrives, most bears are out again and they need to eat.”

Although bears routinely pass through neighborhoods during their daily travels, Plaxico said this in itself does not mean residents have a bear problem.

“Remember that bears have been documented in over 45 counties,” said Plaxico. “They are here and based on our research findings of their home ranges, they travel a lot, especially young males.”

“Letcher County is 338 square miles, so an adult male bear could potentially travel through 41 percent of Letcher County in a year’s time, although a traveling bear will more likely visit portions of two to three counties,” said Plaxico. “We have even documented bears that live part of the year in Kentucky and part in Virginia. No one should be surprised any longer to see a bear in eastern or southern Kentucky.”

Plaxico said female bears don’t travel nearly as much, with their home ranges being closer to 14.9 square miles, or 5,926 acres.

“They travel even less when they have small cubs in tow,” said Plaxico. “Once you see females with cubs, bears are there to stay. Our average cubs-per-female in Kentucky is two to three. However, we visited a den of a female this winter that had four cubs. In years past, we have also seen females have five cubs, although that is rare.”

Black bears in Kentucky breed in June and July, which results in male bears traveling wider in search of female bears.

“If you see two large bears together during this time, it is most likely a female and male,” said Plaxico.

As with most states in the eastern part of North America, Plaxico said the black bear population in Kentucky continues to increase.

“We documented females and females with cubs in several new areas in the eastern part of the state last year,” said Plaxico. “Look for the black bear population to continue to grow over the next two decades.”

“If a bear gets into your garbage, scraps, or pet food, I would not consider it an emergency,” said Plaxico. “It happens somewhere every night during five or six months of the year. You can try scaring the bear away with your car remote, making loud noises, etcetera. Another option is to simply let the bear leave on its own and then remove whatever attracted it to your property to begin with.”

A bear will return to the site if food remains there, Plaxico said.

“When it doesn’t find anything to eat the next time it visits, it will move on,” he said. “Bears do not hang around an area if they are not getting some type of reward.”

The most common bear complaint is the easiest to fix, Plaxico said.

Plaxico recommends that garbage be stored in outbuildings or garages until garbage pickup day. Old oil drums or freezers with latches can be used as storage devices, he said.

Plaxico also advises that birdfeeders be put away after dark.

“Remember, remove the food and you remove the bear,” he said. “Sometimes it takes a neighborhood working together to solve a garbage problem.”

Plaxico said black bears get into garbage during stress period when natural foods are limited.

“One stress period is when they first start traveling in the spring,” said Plaxico. “Lush grass, clover, buds and other natural foods are not in abundant supply so some bears will visit Dumpsters for food. Another stress period is just before the blackberries get ripe in July and then again in August before the acorns fall. That explains why most of our calls come in during April, May and June, and then again in August.”

If natural foods fail like last year when acorns were very limited, then bearrelated calls can continue through the fall up to December, Plaxico said.

Trapping a bear is a last option, he said.

Plaxico reminds people that it is illegal feed black bears in the state of Kentucky, either intentionally or unintentionally.

“Remember that most bear-related issues are easily solved by removing whatever attracted the bear in the first place,” said Plaxico. “Millions of people in the Appalachian region live with bears every day.”