Expect the 2-car tandem at Talladega 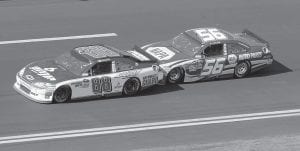 In this file photo, Dale Earnhardt Jr. (88) and Martin Truex Jr. (56) teamed up during the Daytona 500 NASCAR auto race at Daytona International Speedway in Daytona Beach, Fla. Two-car tandems took over the season-opening Daytona 500, where the huge pack of cars broke apart as drivers realized that the fastest way around the superspeedway was with just one partner. Two drivers hooked up, took turns pushing each other to the front, then swapped the lead when their engines got too hot from all that pushing. Many fans fear a repeat of that racing at Talladega, and by every indication, that’s exactly what they’ll see. (AP Photo)

Talladega Superspeedway has long been celebrated for its 500 miles of whiteknuckle racing, the kind of bumper-to-bumper action that keeps fans on their feet from flag to flag.

Those in attendance used to fret that even if they stepped away for a moment they might miss something monumental. Now the fretting seems to be on the style of racing fans will see Sunday when NASCAR shifts to one of its most revered race tracks.

Two-car tandems took over the season-opening Daytona 500, where the huge pack of cars broke apart as drivers realized that the fastest way around the superspeedway was with just one partner. There were very few slingshots through the field, the way Dale Earnhardt Jr. did in 2010 when he charged from 10th to second over the final two laps.

There were, of course, a record 74 lead changes among 22 drivers, and NASCAR welcomed a freshfaced new star in 20-yearold Trevor Bayne, the youngest winner in Daytona 500 history.

But the overwhelming discussion was about the new style of racing, which mimicked a game of leapfrog, in which two drivers hooked up, took turns pushing each other to the front, then swapped the lead when their engines got too hot from all that pushing.

Many fans fear a repeat of that racing at Talladega, and by every indication, that’s exactly what they’ll see.

“We’ll be doing the same thing we did at Daytona,” said one- time Talladega winner Tony Stewart.

“I guarantee you right off the bat, that’s exactly what everybody is going to do as soon as they hit the racetrack — go right back into that mode.”

For years, Daytona and Talladega were known as the two tracks where fans could expect the massive accidents created by pack racing known as “The Big One.” Daytona still had crashes — there were a record 16 cautions — but that didn’t satisfy many fans who couldn’t get their heads around the two-car tandem racing.

NASCAR officials felt the same at the start of Speedweeks, and issued a series of slight technical adjustments designed to prevent the cars from pushing each other for too long. Like everyone else, NASCAR was unsure of how the Daytona 500 would play out, but was ultimately pleased with what officials saw.

“We were curious, too. It was a phenomenon, we’d never seen anything like that,” said NASCAR chairman Brian France. “ But 74 lead changes, dramatic racing all the way through, although it looked a little bit different, the competition level went up. It’s different. But, generally speaking, if competition goes up, the races are exciting, we’re going to like it.”

So aside from a reduction in the size of the horsepower sapping restrictor plate, NASCAR has done very little to force drivers to race any differently this weekend at Talladega.

“The two-car draft is just so potent. Anytime you can tell a race car driver he can go four seconds faster a lap and give him the recipe on how to do it, he’s going to go and put it into play. That’s that two-car draft.”

There’s an element of intrigue to it, too, that forces drivers to place a huge amount of trust in some of their biggest rivals.

The two-car draft forces the trailing car, the “pusher,” to race blind because the driver can’t see what’s ahead of the car he’s pushing. Spotters are forced to be the eyes for drivers they’ve never worked for, and drivers are tapping into the radio frequencies of guys they don’t usually speak to for in-race strategy sessions.

It made Daytona interesting, and not all the drivers enjoyed that intrigue.

“ You can’t see where you’re going if you’re the pusher,” said Mark Martin. “If you’re in front, sometimes you wish you couldn’t see where you were going. It’s pretty tough on you sometimes when you’re running up traffic and you have a guy pushing you that doesn’t really see that.

“We have to trust each other. We have to. Like them or not, you have to.”

Dale Earnhardt Jr. said he didn’t like relying on others.

“I’d rather have control of just what I’ve got to do,” he said. “Having to have responsibility for someone else is a little bit more than I care to deal with.”

There is one caveat that could change the racing a little: Talladega is wider than Daytona, and many drivers believe the track has enough space for the cars to go four-wide. It could lead to more room for drivers to swap the lead, and more space for a fast-closing tandem to get past a slower two-car pack.

“ Talladega is a much wider race track, there’s a lot more racing lines and grooves and room to race on,” Jeff Gordon said. “We should be able to do the two-car drafts a lot easier than we did at Daytona. Hopefully, we’re not hooking and spinning one another like we were in Daytona.”

It’s for sure not going to be the kind of Talladega racing people are used to. That doesn’t mean, however, that it won’t be a thrilling race.