Now that he has signed his letter-of-intent and will soon be joining the University of Kentucky basketball program, Tai Wynyard of Auckland, New Zealand, says he can’t wait to get to Lexington.

“I’m really excited to get into the system and just start balling and learning everything I can,” said the 6-9, 230-pound forward who was part of the World Select Team that beat Team USA at the 2015 Nike Hoop Summit.

His parents, Jason and Karmyn Wynyard, say they are excited and also grateful to Coach John Calipari for giving him this opportunity.

“We believe Tai is ready to pour his heart and soul into this and to take his game to another level,” Jason Wynyard said.

Calipari says Wynyard is a totally different player from others in his signing class or on the current team.

“With Tai, you’re talking about a 6-9 physical athlete who is not afraid to get physical,” Calipari said. “He has good skills. The most exciting part is what he’s done with his country’s national team. Everybody that’s watched him recently has said, ‘Man has he gotten better. He’s competing at a high level.’ They’ve never seen him as physically fit.” 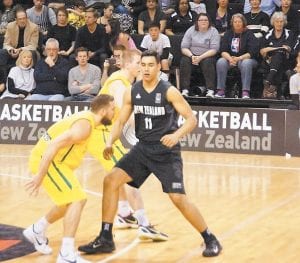 Tai Wynyard, right, isn’t worried about whether he redshirts or plays this season. The 6-9 forward from New Zealand is excited just to be joining Kentucky for the second semester. (New Zealand Breakers Photo)

He committed to Kentucky almost a year ago and has been doing his best to stay in basketball shape while finishing academic requirements so he could enroll at the semester break at Kentucky. He recently spent time playing in Hungary.

“I’ve been playing a lot with the Breakers (his local team) and various other teams, so I’ve been pretty busy. The event in Hungary was a cool experience and I loved being apart of a world champion team. I’ve just been focusing on rebounding the ball and putting it in the hoop,” Tai Wynyard said.

He knows going against Skal Labissiere, Marcus Lee and Isaac Humphries daily in practice will make him improve. Calipari says going against NBA talent like that daily helps players far more than facing future NBA talent in eight to 10 games per year. 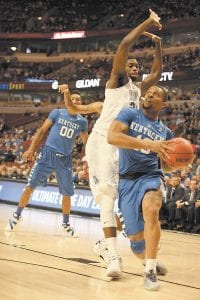 Kentucky freshman Isaiah Briscoe goes to the basket during UK’s win over Duke. Briscoe was the first high school athlete to write for The Players’ Tribune because he wanted to show how social media works. (Photo by Vicky Graff )

“I think it’s going to be a real test of my capabilities (going against them), especially me not getting the training that they have been getting,” Tai Wynyard said. “I will be slightly behind, but I will work hard and use my strength to make up for it.”

Calipari has not told Wynyard whether he will play the second semester or redshirt to save a year of eligibility and just practice with the team. He says either decision is fine with him.

“It really won’t make a difference,” he said. “I’m still going to push myself until I get there and then work is going to get a lot harder.”

His parents sending their oldest son to Kentucky to play basketball will be hard in some ways.

“As parents we are not looking forward to seeing him go. However, we are confident that he is going to be in a nurturing environment where he can learn, grow and be the best he can be,” Jason Wynyard said.

They describe him as a funloving kid that gets along with everyone.

“If Kentucky fans don’t already love him, they will once they get to know him,” said Karmyn Wynyard. “Tai is a good role model and caring big brother to his brother and sister. This makes us proud.”

The player and his parents have seen little of UK basketball this season since games are not on TV in New Zealand.

“Hopefully we can travel as a family to see Tai this season, but for now we are hopeful some games will be aired on TV here in New Zealand,” his mother said.

Wynyard’s parents have been told Kentucky is “basketball crazy.” They don’t think that will bother their son.

“Tai is a very grounded young man, and we are sure he will take it all in his stride,” Jason Wynyard said. “As parents, it’s fantastic to know there is so much support for Kentucky basketball. And now we are fans, too.”

Of course, Tai Wynyard will have to adjust to certain things in Lexington like no surfing or wood chopping like there is in New Zealand. But he also enjoys fishing and swimming when not playing basketball.

“Probably just missing my family and being able to go to the beach will be what I miss most,” Tai Wynyard said.” Being close to the sea is a lot of fun because you can do so much, but I’m sure Kentucky will be amazing, too.”

One distinction that Kentucky freshman guard Isaiah Briscoe will always have is that he was the first high school athlete to write for The Players’ Tribune, a website founded by former New York Yankees great Derek Jeter.

“I was just showing people how today’s world works with social media and everything is captured on either Instagram or Twitter. I just wanted to have my input out there and tell people growing up that this is what you should be looking out for as you get older,” said Briscoe.

He said he was willing to write and share his feelings because of the format The Players Tribune uses.

“You can actually write your paper instead of people asking you questions. I think that was just a great opportunity for me to vent to youth and help them out and let them know what is up and coming,” Briscoe said. “I could see myself writing more blogs for The Players Tribune. I had a blast doing it and just want to thank them for giving me the opportunity.

“I got a lot of feedback. A lot of people saw it and said it was great. That is the kind of rep I want and I want to continue to write for them and become a bigger brother to youth and those growing up.”

Briscoe shared how important social media is and why. Since he got to UK, he says his social media presence has grown.

“Even when they were recruiting me, it grew. I heard Kentucky fans are outstanding. It has lived up to the hype so far,” Briscoe said.

Will the fan noise have an impact on Kentucky football recruiting? Could it cause players to de-commit or make players understand the passion UK football fans have and show them the opportunity to play early at Kentucky?

“Well, I think it can affect somebody in different ways. You’re not sure. We continue to build our relationships and recruit players. Sure, players that are close, they hear the noise and all that. It could affect them either way, I’m sure,” Stoops said.

The coach admitted there was always reason to worry about decommitments at any programs.

“I have heard there is a chance there could be more, but right now there are four of us,” Jackson said.

Former Kentucky All-American Mike Pratt, now a analyst on the UK Radio Basketball Network, knows many fans would still like to see UK play a regular-season game in Louisville like the Cats did for years to give more fans an option to get tickets. He also knows it likely will never happen again.

“I think if all the neutral site games continue — and I am not sure they will — it won’t happen in Louisville. The single hardest thing for a school like Kentucky or Louisville is scheduling. Kentucky would play Duke home and home. Duke does not want to play,” Pratt said.

“North Carolina is not sure it wants to continue a home and home series. Kentucky does. Kentucky had a deal on the table for four games with Indiana. The first two would be in Indianapolis and then in Lexington and then Bloomington. (Indiana coach Tom) Crean turned it down. I saw the contract, so I know that is true. All they wanted was home and home. But you can make more money in Indianapolis than from a home game. It would have been a financial bonanza for both teams. But it won’t happen.

“Same with regular-season games in Louisville. While they were nice, I just don’t see it happening again.”

. If you have a comment, suggestion or criticism, let me know at larryvau@gmail.com or on Twitter at @vaughtsviews. I’ve enjoyed hearing from a lot of you the last few weeks.