Expectations high at UK this season 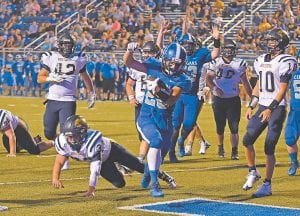 Kentucky opens the football season Sept. 2 at Southern Mississippi with high expectations after a 7-6 season and bowl bid last year. The Wildcats have been picked as high as third in the Southeastern Conference Eastern Division by some college football analysts.

Kentucky coach Mark Stoops has said he expects the team to be better, and his players agree.

That’s why I asked a variety of in-state media members who cover Kentucky football what would be their biggest concern going into the season. In fairness, most answered before the season ending injury to offensive lineman Cole Mosier.

Question: What’s your biggest concern for this team going into the season?

Tom Leach, Leach Report/UK Radio Network: “(Offensive lineman) Nick Haynes’s issue with keeping his weight up is a bit of a concern, given that I thought he was poised for a big year. Otherwise, the defensive line is the obvious one but I think replacing the experienced production of J.D. Harmon, Blake McClain and Marcus McWilson (in the secondary) is a question mark until we see players step up and assert themselves there.”

Freddie Maggard, Kentucky Sports Radio/UK Radio Network: “Identifying and utilizing offensive home run hitters to replace Jeff Badet and Boom Williams will be the common answer. Another is replacing center Jon Toth. However, all my legitimate concerns surround the defense but there are far fewer points of worry than years past. The defensive line is an open-ended doubt, but the closer to Sept. 2 we get, the more confident I’m becoming in the Wildcats’ front seven. I also think that replacing veteran secondary members J.D. Harmon, Marcus McWilson, and Blake McClain will be a more difficult chore than most are expecting.”

Rob Bromley, WKYT-TV sports anchor: “I think this staff has done a tremendous job and really looking ahead to not just this season but there is probably more hope for UK football long range than at any time since I’ve been here … I’ve seen 40 seasons. 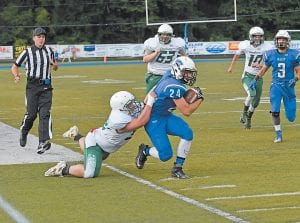 Jenkins High School’s Andrew Watts tackles a Shelby Valley runner during the Cavaliers’ 66-0 loss to the Wildcats. Jenkins will go on the road this weekend to Twin Valley High School in Pilgrim’s Knob, Virginia as they try to regroup. (Photo by Chris Anderson)

“Defensive line has to be the biggest concern along with punting which was inconsistent last season. There just isn’t a lot of experience returning up front. Denzil Ware and Adrian Middleton are proven players. Naquez Pringle and Matt Elam need to man the nose guard spot. It very much depends on how T.J. Carter, Kengera Daniel and Tymere Dubose can develop. They all have game experience. It’s hard to say how players red shirted last season will help but they could. This is a position that UK has to keep recruiting heavily year after year.”

Mary Jo Ford, Mary Jo & Dan Radio Show host on ESPN Radio: “Oddly, my biggest concern is that this team will think too highly of itself. While last year ended up being very positive, and all the offseason talk has been positive, there’s still a ton of improvement that needs to happen for this team to keep moving up and trying to accomplish its goals. It’s so cliché to say ‘stay humble and hungry’, but that’s what this group needs to do.”

Ryan Lemond, Kentucky Sports Radio: “Underachieving. This could be a really special season. We have better coaches, better players, and a better schedule. The BBN is super excited about the upcoming season. That’s why they can’t underachieve this year. They HAVE to win the games they are supposed to win. They CAN’T lose to Vandy, Missouri or Southern Miss. The UK football team has come too far to take a step backwards this year.”

Keith Taylor, Kentucky Today: “The biggest concern I see going into the season is lack of experience on the defensive line and the ability to handle prosperity. Hopefully a couple of newcomers can contribute on the defensive line early and make an immediate impact. The Cats had a good season last year and have been very confident in fall camp, totally different vibe from the previous four preseason camps under Mark Stoops.”

Shawn Smith, gobigbluecountry.com: “The major concern I see at this point would have to be the defensive line. That group struggled mightily last season, ranking 11th in the SEC in rushing yards allowed per game, while putting very little pressure on opposing quarterbacks. That has to change if Kentucky wants to climb the SEC ladder. Depth at that level is a question mark and they cannot afford injuries. Naquez Pringle and Adrian Middleton will be looked to as leaders up front, along with Matt Elam. Senior Jacob Hyde could also see some reps at nose guard, which would provide some much needed depth. If that group can be consistent, Kentucky could be in for a breakout season in the SEC. The D-line doesn’t have to be great; they just can’t be a liability like years past.

“The only other concern I see going into the season is the quarterback battle between Stephen Johnson and Drew Barker. All signs point to Johnson getting the nod to start the opener, but how long is the leash? I think Johnson deserves some wiggle room to begin the season, but it will be interesting to see his reaction if he struggles. I like the calmness and leadership Johnson brings to the offense and that should be enough to solidify him as the starting quarterback.

“Fans should have confidence in either guy, regardless of which one leads the offense. I just hope the fans don’t show their disapproval of Johnson or Barker if they make a mistake early in the season. Having quarterback depth is never an issue, unless the fans turn it into one by calling for a change. Kentucky has two games against Southern Miss and EKU to figure it out. The last thing Eddie Gran wants and needs is uncertainty surrounding the position heading into week three at South Carolina.”

Curtis Burch, Big Blue Insider/ WLAP: “The biggest concern for the team is defensive line play, specifically stopping the run. The coaching staff have said themselves that is a major key to a successful season.”

Next week: Media members share their predictions on the key game for UK and what is a realistic record for fans to expect this season.

During his first season at Kentucky, Drew Barker had a few off- field moments he would rather forget — and he did put them behind him with his work on and off the field.

Now the junior quarterback is coming off back surgery and competing for playing time with Stephen Johnson as UK gets set to open the season. However, his maturity as a person is even more obvious than his improved play on the field coaches and teammates have been talking about.

“I try to hang out with younger guys and show them we do this, we don’t do that. Stay after practice with them and just show them the ropes a little bit. Maybe take them under my wings. I have really developed some good relationships,” Barker said.

“Once you see the opportunity you are being given and see regular students talk about how much student loans are, you really got to take advantage of this amazing opportunity. I have been trying to tell that to these young guys. Sometimes you just come in and get caught up with all football and SEC and all that stuff. But you need to take advantage of academics, too.”

Barker’s parent, Ellie and Terry, certainly have noticed the transformation since he arrived at UK at age 17 after graduating early from Conner High School in December to enroll early in college.

“The change that has taken place in him watching him grow as a person and become a man in front of our eyes has been something. It has been neat,” Barker’s father, Terry, said. “He seems more relaxed, more confident right now. He had a heck of a struggle with his back.”

Terry Barker said the back issues started last summer before preseason practice. Some days were worse than others. His father said the mental stress at times wore on Barker as much as the physical pain.

Now he’s fine. His father knew that when they were playing golf this summer and his son “crushed the ball 300 yards” off the tee.

“All the torque you have to use is about the same as football,” Terry Barker said. “People kept asking him how he felt and he said he didn’t have one twinge of pain. Kudos to his doctor that did a wonderful job relocating the nerve. I am just so happy for him. He’s winning in life now and that’s what really counts.”

John Calipari will be counting on freshman Quade Green to be his point guard this season and lead his inexperienced team.

One player he’ll face is Alabama signee Collin Sexton, another of the top point guards in the 2017 recruiting class. He was on the same team as Green at the McDonald’s All-American Game.

“Quade is a very good point guard. Always calm and poised. You can’t rattle him. I feel like he gets up under you (on defense). We pushed each other in practice and we will get after each other next year, too,” Sexton said.

Sexton had played against Green before at Team USA camps.

“He is a very high motor player and is always talking out there. That’s what I like most about him. He’s a great leader,” Sexton said. “He plays very good defense all the time. If he scores or doesn’t, he is going to play defense. With Quade, that’s never going to change because all he really cares about is winning. That’s what makes him so good.”

Quote of the Week: “He is one of those guys who came to work every single day. Not only will we be missing his size, but his leadership. You could trust him anywhere. His time here is not over. He will still lead even though he cannot play,” Charles Walker on UK senior offensive lineman Cole Mosier after a knee injury ended his season.

Quote of the Week 2: “I have tried forever. I have tried different scenarios on how to do it. I just can’t do it no matter how hard I try or how I try to do it,” UK senior volleyball libero All-American Ashley Dusek on not being able to whistle.

Quote of the Week 3: “We’re our own worst enemy sometimes. We got to get through that. We can’t do that crap. We’ve got to fix those things. We’re mature enough to make sure that those things don’t happen,” UK offensive coordinator Eddie Gran on his offense.