“You wouldn’t do a weight session right before you exercise, and you shouldn’t stretch right before either —Kieran O’Sullivan, exercise expert 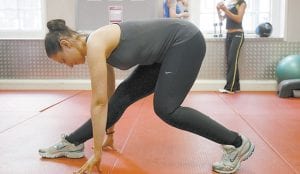 Jen Solomon, a personal trainer, demonstrates stretching in a gym in central London. Many people take it for granted that they should start their exercise routines with some stretching on the spot, perhaps hoping it will loosen them up for their work-out. Most fitness experts now agree this kind of static stretching before exercise is not just counter-productive, but potentially harmful. (AP Photo)

Many people take it for granted that they should start their exercise routines with some stretching on the spot, perhaps hoping it will loosen them up for their work-out. Most fitness experts now agree this kind of static stretching before exercise is not just counterproductive, but potentially harmful.

Traditional stretches, like when people bend over to touch their toes or stretch their legs on a fence, often cause the muscles to tighten rather than relax — exactly the opposite of what is needed for physical activity.

Experts say it is like extending a rubber band to its limit. When people stretch to the maximum, they are more likely to pull a muscle.

“We have developed this idea of static stretching at exactly the wrong time,” said Kieran O’Sullivan, an exercise expert at the University of Limerick in Ireland, who has studied various types of stretching and their impact on athletes.

When you stretch before exercising, your body may think it’s at risk of being overstretched. It compensates by contracting and becoming more tense. That means you aren’t able to move as fast or as freely, making you more likely to get hurt.

O’Sullivan said stretching helps with flexibility, but people should only do it when they aren’t about to exercise, like after a workout, or at the end of the day.

“It’s like weight training to become stronger,” he said. “You wouldn’t do a weight session right before you exercise, and you shouldn’t stretch right before either.”

In the last few years, several studies have found static stretching before playing a sport makes you slower and weaker.

And when experts at the U.S. Centers for Disease Control and Prevention combed through more than 100 papers looking at stretching studies, they found people who stretched before exercise were no less likely to suff er injuries such as a pulled muscle, which the increased flexibility from stretching is supposed to prevent.

Instead of stretching, many experts recommend warming up with a light jog or sport-specific exercise, like kicking for football or a few serves for tennis. That type of light movement increases the heart rate and blood flow to the muscles, warming up the body temperature.

“This allows you to approach your full range of motion, but in a very controlled way,” said Dr. Anders Cohen, chief of neurosurgery and spine surgery at the Brooklyn Hospital Center and former physician for the U.S. Tennis Open. Cohen said elite athletes in all sports are increasingly ditching static stretching and using other warm-up techniques instead.

But the message has yet to trickle down to legions of joggers and recreational athletes. “This is classic, oldschool stretching that has been done for generations,” Cohen said. “It’s going to be very hard to convince people to start doing something diff erent.”

In a study published earlier this year in the Clinical Journal of Sport Medicine, Roberto Meroni of the University of Milan and colleagues found people who stretched using conventional techniques, like bending over to touch their toes, were less flexible than those who did a more active type of stretching that used more muscle groups.

Meroni said static stretching simply forces the muscle being stretched to endure the pain of that stretch. With active stretches that work more muscles, the stretched muscles learn to extend while another group is working.

Those types of stretches are commonly used in yoga, which emphasizes how the body is aligned during stretches, not just flexibility. Many yoga poses involve the whole body and focus not only on stretching a particular muscle, but the ligaments, tendons and joints around it.

Maximizing the benefits of stretching may simply boil down to a matter of when you do it and how, according to Jonny Booth, a health and fitness manager at a north London branch of gym chain Fitness First.

“If you are going to stretch your muscles and then do some intense training, you’re not going to get fantastic results,” he said.

Instead, Booth recommends active stretches that mimic the movement of your intended activity, like some deep knee lunges while walking for runners.

“Stretching is vital to become more flexible,” Booth said. “But it has to be done at the right time and for the right reasons.”