Experts: No ‘edge’ from Viagra 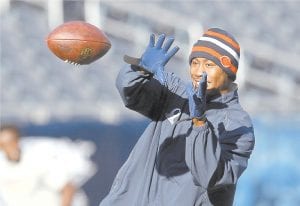 Chicago Bears star receiver Brandon Marshall said he had heard that some players were using Viagra and hoping it would give them an advantage during games. (AP photo)

The idea that NFL players might use Viagra to gain an edge on the field left Chicago Bears linebacker Lance Briggs practically in tears — from laughing.

He wasn’t the only one.

Players cracked jokes about it last week after Bears star receiver Brandon Marshall said he had heard that some players were using Viagra and hoping it would give them an advantage during games. Punch lines aside, experts say it’s unlikely the erectile-dysfunction drug would help.

“What would that do? That’s the most ridiculous thing I’ve ever heard,” Minnesota Vikings long snapper Cullen Loeffler said.

Bears defensive back D.J. Moore wondered if Marshall was kidding and said: “I’ve never heard of that.”

Marshall started it all one week ago when asked about a growing number of suspensions tied to amphetamines, including the ADHD drug Adderall. He said he didn’t know much about Adderall, but suggested Viagra could be viewed by players as a way to boost their energy.

“I know guys, it’s such a competitive league, and guys try anything just to get that edge,” he said. “I’ve heard of guys using Viagra, seriously, because the blood, it’s supposed to thin. I don’t know. Some crazy stuff. It’s kind of scary with some of these chemicals that are in some of these things, so you have to be careful.”

But using Viagra for more touchdowns and tackles?

“ I didn’t even know people could do that,” New York Giants tight end Martellus Bennett said. And his teammate Justin Tuck added: “I can’t imagine why people would take steroids, so I have no comment on Viagra. Besides, my wife would be very upset with me.”

Arizona Cardinals defensive lineman Vonnie Holliday, a 15-year NFL veteran, said some of his teammates were talking about Marshall’s Viagra remarks but he had never heard of such a thing himself.

“I don’t understand what good it would do,” he said.

Dr. Olivier Rabin, science director at the World Anti- Doping Agency in Montreal, said it is unlikely Viagra does anything to improve football performance in NFL players. He also said there is no evidence the drug might somehow mask the use of steroids or other performance-enhancing drugs.

Rabin noted that research in high altitudes found the drug helped improve oxygen flow in climbers with impaired lung function. That’s because Viagra can dilate blood vessels, and vessels in the lung constrict in high altitudes.

Research involving cyclists at high altitudes found similar benefits, but Rabin said studies have shown the drug has no effect on athletic performance at sea level.

“No one has really tested it in football players doing exercise. Whatever benefit they think they’re getting is probably more psychological than anything,” said Jacobs, an associate professor in the kinesiology and sport sciences department.

Marshall said he doesn’t take medication “of any sort” and noted that the NFL’s drug policy is strict.

“Any time you take anything over the counter, if you don’t approve it with your training room, you can get popped,” he said. “Some of it’s fair, but some of it kind of puts you in a tough spot as a professional athlete. Because the only thing you’ll see is getting busted for PEDs, but it could be something over the counter for a little sickness. You just have to be on top of your Ps and Qs.”