Experts say influential health survey must be slimmed down 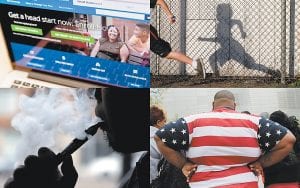 This combination of file photos shows the HealthCare.gov website; students in an early morning running program at an elementary school in Chula Vista, Calif.; an electronic cigarette in Chicago, and an overweight man with a shirt patterned with the U.S. flag in New York. When the government launched what would become most influential survey to monitor the nation’s public health 60 years ago, there were just 75 questions, and 95 percent of those asked agreed to sit for it. There are now 1,200 potential questions, and the average family takes more than 90 minutes to answer them. The refusal rate has gone up, as well, raising concerns that the survey has gotten too big. (AP Photos)

When the government launched what would become most influential survey to monitor the nation’s public health, there were just 75 questions — and 95 percent of those asked agreed to sit for it.

But that was nearly 60 years ago, and the National Health Interview Survey has mushroomed along with the government and its interests. There are now 1,200 potential questions, and the average family takes more than 90 minutes to complete the survey.

Not surprisingly, the refusal rate has gone up, as well: Thirty percent are refusing to take part. And that has raised concerns that the survey — conducted in people’s homes — has gotten too big.

“If you tell them it’s going to take an hour and it could be longer… right away people are going to say no,” said Joseph Paysen, who oversees the survey in the New York City area.

As officials embark on a redesign, they’re contending with bureaucratic obstacles and pleas from researchers who want more questions asked, not less.

U. S. Census Bureau workers conduct the survey every year, on behalf of another federal agency, the Centers for Disease Control and Prevention. It’s a $30 million annual project, and somewhere around 50,000 people answer the survey’s questions each year.

Their answers have shaped our understanding of topics ranging from how common arthritis is to how many people get X-rays to what proportion of U.S. children suffers seizures. The survey’s responses also are the foundation of how we measure the nation’s progress (or backslide) on problems like obesity and smoking.

Tellingly, the CDC recently added questions to it about use of electronic cigarettes — even though other surveys already asked about that subject — because the agency wants a new, unimpeachable statistical baseline on the controversial topic.

“It’s been kind of the gold standard” for continuous, nationally-representative information on the American public’s health, said Lynn Blewett, a University of Minnesota expert on health data.

The survey has been a crucial source of health information for a long time.

In the 1800s and early 1900s, infectious diseases ranked as the nation’s leading causes of death, so most government health statistics involved births, deaths, and germ illnesses. But with the development of germfighting antibiotics and other advances, illnesses like heart disease and cancer became the top killers, and new kinds of statistics were needed.

In 1956, President Dwight D. Eisenhower signed a law creating the health interview survey. The purpose was to learn how common chronic illnesses and disabilities were, and to learn about the characteristics and behaviors of people who had them. The survey began in 1957. It was placed under the CDC’s umbrella in 1987.

The survey’s data became the basis for measuring the nation’s progress in fighting disease. It spurred funding for a CDC arthritis program, and shaped the agency’s policy on cervical cancer screening. It was the first federal household survey to track the growing popularity of cell phones. And it’s been a primary measuring stick for how many people are gaining health insurance under the 2010 Affordable Care Act.

But now it’s just one data source in a crowded field. The CDC has conducted or funded hundreds of surveys designed to improve researchers’ understanding of peoples’ health and health behaviors. That includes roughly 20 ongoing surveys of all or parts of the U.S. public. Many are focused on specific topics.

Meanwhile, people are being approached for political polls or other surveys, or asked for personal information by businesses trying to sell them things. Bombarded by so many solicitations, “you’re not trusting” when approached to be part of the government health survey.

No one’s talking about doing away with the health interview survey, but there have been proposals to merge it with other government health surveys.

But researchers and advocacy groups have been sharply opposed to the idea. Indeed, many of them want the survey to get bigger, not slimmer.

“I’m concerned about mental health,” Vickie Mays, a UCLA researcher who works with survey data. A more comprehensive, ongoing set of questions on that topic is needed to better understand the nation’s psychological well-being.

Each survey also has a constituency within CDC, some located in at CDC headquarters in Atlanta and some at a CDC sub-agency — the National Center for Health Statistics — in Hyattsville, Maryland.

The CDC is currently soliciting public comment for a redesigned survey that’s to be used starting in 2018.

The last such redesign was in 1997, after the survey had crept up to a two-hour experience.

Paysen — the New York supervisor who works for the Census Bureau — has watched families go through the health interview survey in recent years, and he has detected frustration with what seemed to them to be redundant questions.

“The shorter it is,” Paysen said, “the easier it will be.”