Experts: The Grinch is depressed 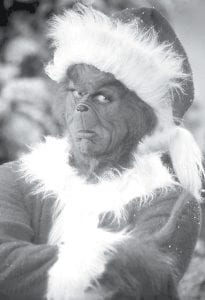 “Everybody’s always so down on the Grinch,” says Bulik. “But one of the things I’ve always asked myself is whether the Grinch himself might be feeling kind of down.

“When people think about depression they often think about people being sad,” says Bulik, who has not officially treated the Grinch, but is very familiar with his story.

Being irritable, grumpy and seeking social isolation are also hallmarks of depression, and could explain the Grinch’s disdain for the Who — the tall and the small — his mistreatment of his dog Max and, ultimately, why he tried to stop Christmas from coming.

“Especially around the holidays you look around and everyone seems to be feeling the joy, but inside you’re just feeling dark and miserable,” Bulik says. “It’s that contrast between how you’re feeling inside and how all those happy people are feeling out there that can really be torture for someone who has depression.”

“One of the things that happens with people who are depressed, and we see this especially with the Grinch, is that people don’t really want to be around him, and he doesn’t want to be around people,” Bulik says. “So, he’s not getting a lot of love.”

And, she points out, depression can have physical manifestations. The Grinch is overweight, is badly in need of dental work and, Bulik says, “I think what we might be seeing is that his heart might be shriveling from a lack of love.”

The Grinch also might be suff ering from seasonal affective disorder, which is associated with fewer hours of daylight, Bulik says. “There are a lot of people who get depressed as the days get shorter, and fall and winter arrive.”

So, Bulik says, besides learning that Christmas doesn’t come from a store, we can learn from the Grinch that depression doesn’t always manifest as sadness.

“If there’s someone in your life who is just really irritable and miserable, and just not getting any joy out of life, you have to wonder whether they might be being challenged by depression,” Bulik says. “Reach out and see if some of your friends who are not doing well could use some help.”