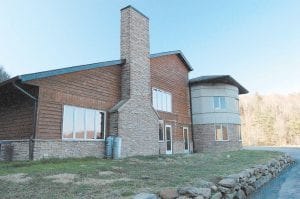 The Letcher County Extension Serivice is located on a hillside above Whitesburg.

The Board of Directors of the Letcher County Cooperative Extension Taxing District has accepted the resignations of four board members and the district’s treasurer. Meanwhile, two new district board members were appointed and sworn in by Letcher County Judge/Executive Jim Ward.

No reasons were given for the resignations of board members Truman Halcomb, Kathy Napier, Howard Stanfield and Diann Watts and no one discussed the matter when Dock Frazier, chairman of the six-member district board, read aloud their resignation letters during a Jan. 19 meeting.

The letters submitted by Halcomb, Stanfield and Watts said only that they were resigning. Napier’s letter noted personal reasons.

“ I hold the services with the county extension at high regard, but I am unable to continue in my term,” Napier said in her letter. “The Letcher County Extension service has wonderful programs and I wish all great success in the process.”

Halcomb, of Jeremiah, and Watts, of Cumberland River, were ending three-year terms, but their names were not submitted to Judge Ward for reappointment. The Letcher County Extension Council instead voted at an October 4 meeting to ask that Ward choose from the names of Liberty Campbell, Chris Caudill, Harry Collins and Sonja West.

The extension council, which is made up of members from the 4-H council, the agriculture council and the family consumer science council, serves as the programing arm of the Extension Service while the district board serves as the budgeting arm.

Frazier and Ruth Shackleford are the only two board members who didn’t submit resignation letters.

“I hereby resign my position as treasurer in the light of recent failure of extension office personnel to follow procedures related to building and subsequent of selection of new board members without following proper procedures,” wrote Fleming. “And I no longer want to be associated with the extension services. Please take the proper steps to remove my name from all documents and filings reflecting me as treasurer.”

Fleming told The Mountain Eagle after last week’s meeting that the district board gave specific instructions to the Extension Service personnel concerning the construction of a $100,000 educational classroom building, which was built adjacent to the extension office near Stone Avenue in Whitesburg.

“ The board was very clear on what they wanted done,” said Fleming, who did not attend last week’s meeting. “None of that was followed. It was handled very poorly.”

Fleming said there was no sign of liability insurance at the beginning of the project and neither an architect nor engineer was hired for the project. He said the district board tried to be good stewards of taxpayers’ dollars and tried their best to hold employees known as “county agents” accountable.

“It’s not the board I have any problem with at all,” said Fleming. “It was just the agents in charge of the project didn’t follow procedures. Taxpayer dollars weren’t being managed properly at all. To me it was a serious matter.”

The educational classroom was proposed last summer after the Letcher County 4-H Raptor Rehabilitation Program achieved a level of success that required extra space for rescued birds including red-tailed hawks and owls.

Fleming said he was also concerned that Halcomb and Watts were not asked to serve another term. He said district board members almost always are nominated for a second term unless a member didn’t want to serve again.

“They just didn’t have the opportunity to voice their opinions,” said Fleming.

Chris Caudill, an employee with the City Of Whitesburg, and Harry Collins, a teacher at Arlie Boggs Elementary School, were sworn in last week as the two newest district board members. Collins was also appointed to the position of acting board secretary.

Two vacancies remain on the board. The extension council met Jan. 23 and voted to have Ward choose either Dr. Kevin Roark or Drew Baldwin to finish out the year left on the term of the board member representing agriculture. Ward will also be asked to choose either Frances Whitaker or Delana Banks to serve two years on the board as family consumer science representative. The two who are selected by Ward will be sworn in at a special meeting in February.

Also at the Jan. 19 meeting, the district board voted to advertise in The Mountain Eagle for the services of a new treasurer. Jason Brashear, the county agent in charge of 4-H, told the board that bills had not been paid since Fleming resigned, and that some of the bills were almost two months behind. Until a new treasurer is hired, the board authorized Alice Craft, staff assistant at the Extension Office, to write checks for critical bills such as credit card payments and utilities.

Brashear, who also serves as the budget contact, and Shad Baker, the county extension agent for agriculture, said they want the new treasurer to submit monthly reports with a list of detailed expenditures to the district board.

“It would make it much easier for us,” said Brashear.

“That’s part of the great responsibility of this board is to overview and oversee the management of the budget,” said Frazier.

Baker said there have been “some issues with questions arising and people not understanding what things were for.”

“… If there are any future issues, getting on the phone and calling us or stopping by and asking us in person would be a nice thing,” Baker added.

“ That is an issue and some of these things had a history …,” said Frazier. “Let’s just declare in this contract if there are questionable areas then the agent with whom those questions would be posed to would be contacted.”

Fleming told The Eagle that in an effort to hold the county agents more accountable the board had voted within the last year to have the agents fill out purchase orders if the total spent reached a certain amount. He said the purchase orders were met with resistance from the agents.

Baker also said during the meeting that documentation of quarterly payments to the University of Kentucky should be sent to the Quicksand office of the Extension Service.

“I know that was a running issue always,” said Baker.

Fleming said copies of checks to UK were regularly sent to the Quicksand office.

Baker also recommended to the board that the new treasurer be required to sign a confidentiality statement.

“I feel like that if there is a discussion of things that take place at the office, that really needs to be kept in confidence with the board,” said Baker. “They are going to be an employee of the board and so you guys (are) who that person is going to answer to. They need to remember that they are working for you. I mean, I answer to my boss.”

Fleming said the extension office is funded with taxpayer dollars and that all business conducted by the agency should be open to the public.

“It is all taxpayer money,” said Fleming. “There is nothing to hide. There should be no problem disclosing that.”

Baker also suggested having the treasurer’s position be subject to annual renewal in case problems arise.

Frazier, the board chairman, expressed frustration with the recent controversy involving the Extension Service board.

“Bless my heart, I always had this perception that we are all good ol’ boys and girls and we are never going to have any problems, but that is not the real world,” said Frazier.

New board member Collins said he is ready for the district board to move forward.

“ I don’t have a tainted view of what is going on,” said Collins, who also serves as the chair of the extension council. “Our goal is to serve the people of Letcher County.”

Collins said his goal is for the extension office to be as transparent as cellophane.

The extension office is a cooperative effort between federal, state and local governments and the University of Kentucky and Kentucky State University to provide research to the public. Brashear said he and the other two county agents at the extension offi ce answer a wide range of questions concerning daily living. How to deal with mold, the proper way to plant blueberry bushes and child behavior questions are examples of topics people call about, he said.

The three extension agents are paid by UK and are available to answer questions and facilitate programs. Ann Bradley is the agent for family consumer science.

In 2010, the extension service collected $395,810 in operating revenue from taxes it collects in Letcher County on real estate, personal property and motor vehicles.