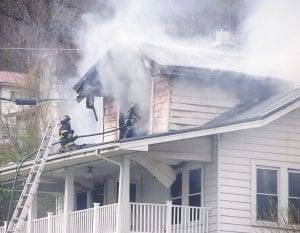 — Jenkins volunteer firefighters worked to contain a fire at the Payne Gap home of Frank Holbrook on the morning of April 10. Jenkins Police Chief Jim Stephens said the fire, which broke out at approximately 8 a.m. and caused heavy damage the house, was fueled by items being stored in the home, including tires and gas tanks. No one was injured in the blaze. The Jenkins Fire Department was assisted through mutual aid from the Neon, Mayking and Sandlick firefighters. (Photo by Chris Anderson)