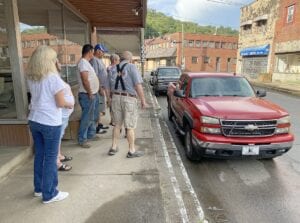 CHECKING IT OUT ­— Members of the Fleming-Neon City Council inspected this red Chevy pickup truck Monday night before agreeing to accept it from Rodney Rose as his part of a trade for an old city-owned backhoe that hasn’t been used in years.

The Fleming-Neon City Council appointed a new member this week, filling a seat that has remained vacant throughout the year.

At its July meeting on Monday, the council appointed Michelle Wright, a resident of the Fleming area, to fill the vacancy left after the city’s most recent council election. Wright was nominated by Mayor Susan Polis, and the council voted unanimously to appoint her.

“I feel good, and a little nervous,” Wright said after the meeting. “It’s a venture out of my comfort zone.”

Wright is a 23-year resident of Fleming-Neon. She said she’d considered seeking election to the city council in the past after her son left Neon on a college scholarship to Yale. Wright said that at that time, she wasn’t ready to serve on a governing body, but is now looking forward to work with the public and her fellow council members.

“I want to listen to people,” she said, adding that she does not currently have any issues she intends to press. “This (city council) is a good group of people and I want to work together with everyone.” 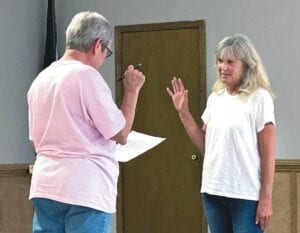 In other business at Monday’s meeting, the council declared a city-owned backhoe to be surplus equipment and agreed to trade it for a pickup truck owned by Rodney Rose. The action came after Rose proposed the trade to the council. Rose said the backhoe had not been used in several years and had numerous mechanical issues which would likely cost several thousand dollars to repair. He said he owns another backhoe which could be used as parts.

Rose cited the city’s need for new vehicles, particularly a four-wheel-drive truck, as a reason for proposing the trade.

“You all need a truck, I need a backhoe,” Rose told the council.

The discussion came moments after Lisa Napier, a representative of the Kentucky River Area Development District, introduced herself as the new KRADD representative for Fleming-Neon and told the council that infrastructure grants will soon be available as part of the federal COVID-19 relief package. Napier added that new vehicles may also be purchased through separate funding. Polis told Napier the city is in “dire need” of a packer garbage truck and a new four-wheel-drive pickup truck.

Rose’s truck is a four-wheel drive 2006 Chevrolet 1500 pickup, red in color. The truck, he said, has a new engine with approximately 20,000 miles and a body with 94,000 miles. The council exited Fleming-Neon City Hall to view the truck during the discussion.

Holbrook made a motion to declare the backhoe surplus and to trade it for Rose’s truck, and the motion was approved unanimously. A timeline for completing the trade was not set.

The council also heard from Bill Lewis, a 43-year resident of Fleming who spoke about “the good old days” when Neon had several businesses and a bustling downtown area. Lewis offered several suggestions for attracting people back to the area, including the city working to locate new businesses into downtown Neon.

“You go through town now, you don’t see those things,” Lewis said.

Lewis also spoke about issues with several roadways in and around the city, several of those roads being state highways.

The council also heard from Misty Johnson, a member of Ignite Church located on Main Street in Neon. Johnson said the church has several events planned and asked the council for its blessing for those events, which includes a public cleanup, a fall festival, and a bike night. Johnson said she and her fellow church members plan to conduct the cleanup Aug. 28 from 8 a.m. to noon in order to give the town a facelift before this year’s planned Neon Area Days festival.

The council did not hold a formal vote to approve allowing Ignite Church to hold the events in the city, but the council members expressed their support for the projects and pledged to help and promote the events in any way possible.

Mayor Polis told Johnson that the proposed bike night event may be held on the Neon walking track.

Johnson also said she wanted to enter a bid of $2,500 for a city-owned building that formerly housed the Neon Public Library. Polis said the city had previously received a bid of $2,100 for the building and took Johnson’s bid into consideration. No action was taken.