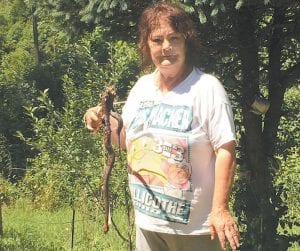 SNAKE IN THE TEAPOT — Denita Calihan poses displays the copperhead she had to kill after it nearly struck her in the face. The snake was hiding in the teapot seen hanging on the tree behind her.

Denita Calihan has dealt with her share of copperheads during her 73 years at Kingscreek, but never before had an encounter with one of the poisonous snakes left her as badly frightened as the one she just recently came face-to-face with.

Calihan was in the front yard of her Paces Branch home last Thursday morning when she saw that a branch of a Tommy Toe tomato plant she was raising needed reattached to a tree she was using as a stake. As Calihan prepared to grab the tomato plant, she just happened to see a copperhead poised to strike her in the face.

The copperhead had managed to slither its way into a small metal teapot Calihan had attached to the tree as a decoration. She said the teapot was hanging from the tree about four feet off the ground, just where her face was as she was bending over to tend to the Tommy Toe.

“He was eye level to me,” she said. “He could have gotten me directly in the face.”

Shaken by finding a copperhead in the teapot, Calihan quickly decided she had to kill the snake for the safety of herself and her family. But how? 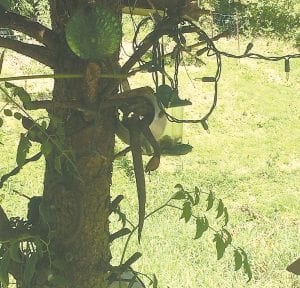 This photo shows the copperhead hanging out of the teapot, now riddled with bullet holes.

In terms of summer dangers, Calihan’s encounter with the copperhead wasn’t the worst thing she encountered last week. The night before she killed the snake she had to visit the Whitesburg Hospital’s emergency room after suffering an allergic reaction to more than 15 stings she suffered after disturbing a nest of yellowjackets.

“Thank the Lord for those ‘epi shots,’” Calihan said, referring to the EpiPen, an autoinjector device which provided her with the required dose of the drug epinephrine (adrenaline). “And then I come home and find this.”

Asked how many copperheads she has dealt with over the years, Calihan answered, “I bet I’ve killed a pickup truckload in my lifetime.”

“This place should have been called Copperhead Road instead of Paces Branch,” she added. (Letcher County does have its own Copperhead Road, bit it is located on Craft’s Colly near Ermine.)

The northern copperheads like those can be found in Letcher County are the most abundant of Kentucky’s four venomous snakes — the others are cottonmouths found only in far western Kentucky, the timber rattlesnake found in every region except the Bluegrass, and pygmy rattlesnakes found in only three of the state’s far western counties (Calloway, Lyon and Trigg). Like the rattlesnakes, copperheads are almost never found in the inner Bluegrass region.

Because copperheads love to hunt prey on very warm evenings, they can often be found on gravel and blacktop roads at night during heat waves like the one Kentucky is now experiencing. It is also not uncommon during periods like this for copperheads to find their way inside houses and buildings as they look for a shady spot to await their evening hunt.