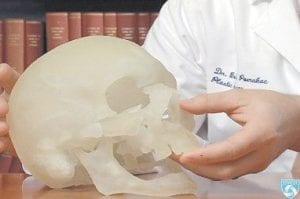 Plastic surgeon Dr. Bohdan Pomahac held a replica of part of an unidentified donor’s face, right, up to a replica of a skull representing the damage done to an unidentified transplant patient’s face. The man, who suffered traumatic facial injuries from a freak accident, had his nose, palate, upper lip, and some skin, muscles and nerves replaced with those of a dead donor on April 9. (AP Photo/Brigham and Women’s Hospital)

Five years ago, it was the stuff of science fiction: Replace someone’s face with one from a dead donor. But last week, Boston doctors performed the world’s seventh such transplant ? less than a week after one in France ? and plans are in the works for more.

“Society is allowing us to do this. I think you’re going to see more and more,” especially in soldiers disfigured in recent wars, said Dr. Frank Papay, a surgeon who helped perform the first U.S. face transplant, in December at the Cleveland Clinic.

Some of the successes have been dazzling. People who couldn’t eat, speak normally, or go out in public now can walk the streets without being recognized as someone who got a new face.

Even so, face transplants are likely to remain uncommon, used on only the most severely disfigured, because of the big risks and lifelong need to take medicines to prevent rejection.

“It’s not going to be like some people imagine ? routine, like people getting a facelift, or cosmetic surgery,” said Stuart Finder, director of the Center for Healthcare Ethics at Cedars-Sinai Medical Center in Los Angeles. 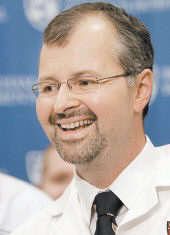 “We have what appears to be success,” he noted, but there is always the chance that some patients may experience serious rejection problems or refuse to stay on the required lifetime of drugs.

Boston doctors stressed the care and psychological screening they required before performing the nation’s second face transplant on April 9. The operation, at Harvard-affiliated Brigham and Women’s Hospital, was on a man who suffered traumatic facial injuries from a freak accident.

Face transplants go far beyond the transfer of skin and facial features, using things like bone and cartilage for reconstruction. The team led by plastic surgeon Dr. Bohdan Pomahac replaced the man’s nose, palate, upper lip, and some skin, muscles and nerves with those of a dead donor.

The hospital would not identify the recipient or donor, but the donor’s family members released a statement saying they hope the procedure convinces others to donate.

“The fact that we are able to give this gift was a tremendous comfort in our time of grief,” the statement said.

At a news conference on April 10, Pomahac said: “There is no risk of recognizing the donor on the new patient. There’s a 60 percent chance the patient will look how he used to look.”

In a phone interview earlier April 10, Pomahac said the man’s injury occurred some years ago, and it left him with “no teeth, no palate, no nose, no lip.”

“It was difficult for him to speak, to eat, to drink. It certainly caused a lot of social problems,” Pomahac said.

The man had been Pomahac’s patient for a long time, and doctors decided to pursue a face transplant because previous attempts to treat him left him still badly deformed. It took three months to find a suitable donor, who also provided some organs for transplant in other patients, Pomahac said.

The 17-hour operation began at 1:15 a.m. April 9, with the recipient and the donor in operating rooms across the hall from each other. The patient was still recovering from anesthesia the next day.

“He’s still not fully awake so he has not seen himself. We have not really had a meaningful conversation so far,” Pomahac said.

“He was incredibly motivated to go forward with it,” and was extensively evaluated psychologically by doctors in and outside of Brigham, Pomahac said. “We really made sure that nothing was left to chance.”

The seven primary surgeons and other assistants all donated their time and services, Pomahac said.

“We are essentially making a lifelong commitment to help him,” the surgeon said.

Pomahac was born in Ostrava in the Czech Republic, and graduated from Palacky University School of Medicine in Olomouc, Czech Republic. He came to Brigham for a surgical research internship in 1996 and now, at 38, is associate director of its burn center, where he treats trauma and plastic surgery cases.

The Boston hospital’s board approved Pomahac’s plans to offer face transplants a year ago.

The world’s first transplant in 2005 was led by Dr. Jean- Michel Dubernard in Amiens, France, who treated Isabelle Dinoire, a woman who had been mauled by a dog and grotesquely disfigured. Dinoire’s appearance today is virtually normal.

The first U.S. face transplant, and the most extensive operation so far, was done in December by doctors at Cleveland Clinic. They replaced 80 percent of a woman’s face with that of a female cadaver. The woman’s identity has not been revealed, nor the circumstances that led to the transplant.

The woman left the hospital in February, and is doing “phenomenally well,” Papay said. “Her speech is improved so everyone can understand her now, and she has a great outlook on life. She’s very comfortable with the way she looks now and she’s very happy.”

The early successes are encouraging, but should not lead to over-exuberance, and extending the operation too fast, said Finder, the Los Angeles ethicist.

“This is still very new and hence requires a hypervigilance about helping patients understand what they’re getting into,” he said.

People who have received other transplants ? organs, hands ? have sometimes discovered they traded one set of problems for another, and get sick of taking the medicines needed to maintain the transplant. At least one hand transplant recipient later had the hand amputated for this reason.

Pomahac originally was considering only people who had already received a kidney or other organ transplant, because they already would be on immune-suppressing medicines and would therefore have a low risk of rejecting a new face.

“I still think that’s the best group of patients but we have enlarged the protocol” to include others with severe facial deformities, he said.

“It’s really in its infancy in terms of knowing what will happen,” he added. “Each of the cases is its own unique story.”

Eventually, surgeons hope to form waiting lists of face transplant candidates “just like for any other organ,” Pomahac said.