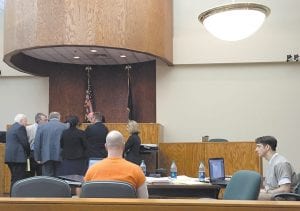 That’s the message delivered in Letcher Circuit Court June 10 when several county residents were forced to go to court to answer for either “liking” or commenting on an online petition that appeared on Facebook and called for keeping the trial of two men charged in the 2014 stabbing death of 24-year-old Michael Shane Hogg in Whitesburg.

While only six residents testifed who posted comments to the online petition opposing a change of venue in the murder trials of James Huffman and Patrick Smith, as many as 40 other potential witnesses found themselves having to stand or sit in the floor of a Letcher County Courthouse hallway for more than six hours without getting a break for food or drinks.

The six witnesses who did testify and those who waited in the hallway were among 52 persons subpoenaed to appear at Friday’s change of venue hearing by defense attorney Robert Wright of Pikeville, who represents Huffman. 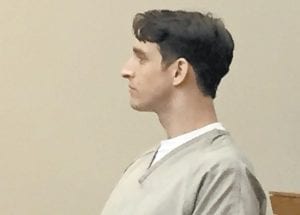 James Huffman, right, appeared in Letcher Circuit Court on June 10, where he asked for a change of venue for his trial in a case in which he is charged with the New Year’s Day 2014 stabbing death of Michael Hogg.

The subpoenas were issued several weeks after 515 people electronically signed a petition that originated on the website change.org in opposition to defense efforts to move the trials away from Letcher County.

Huffman is accused of stabbing Hogg in the chest around 2 a.m. on January 1, 2014 during an altercation near the entrance of a parking lot on Hayes Street, also known as Back Street, in downtown Whitesburg. Smith is charged with complicity to murder. David Christopher Puckett of Jenkins, and Stacy Phillips of Thornton, also suffered stab wounds during the altercation.

Citing pretrial publicity, Huffman filed the motion for the venue change and was joined by Smith.

In addition to those who signed the petition, which originated on change.org and found its way to Facebook, subpoenas were also issued to Mountain Eagle editor Ben Gish, Letcher County News-Press editor Tina Whitaker and WYMTTV in Hazard. Attorney Wright said Facebook is a factor in whether Huffman can get a fair trial in Letcher County.

While Gish and Whitaker honored their subpoenas, CBS affiliate WYMT chose not to do so. WYMT’s refusal to appear resulted in Special Letcher Circuit Judge Kent Hendrickson ordering station officials to appear at a future hearing to “show cause” why they shouldn’t be held in contempt of court for failing to honor the subpoena. Hendrickson ordered the hearing after asking attorneys whether they wanted him to issue arrest warrants for those responsible for WYMT’s failure to appear.

The hallway outside the courtroom was filled with people who had been subpoenaed for the hearing, which was scheduled to begin at 10 a.m. Most waited for more than five hours before being released without testifying. Many of the people subpoenaed said the participated in the petition after seeing a link to the document on Facebook.

The six people who were questioned on the witness stand said they didn’t know who started the petition.

Bennett Kincer, 32, of Ermine, told Wright he believes the petition is something Wright “stirred up.”

Kincer said on the petition that Hogg’s family shouldn’t “have to drive out of the county to see these two put away for life. They decided to come here and take such a wonderful person’s life that didn’t deserve to die.”

Wright asked those who testified about the petition if the murder case had received a lot of publicity and if they had talked to people about it, read about it in local newspapers or watched a newscast about it.

“It’s the nature of people to talk,” said Kincer. “If somebody is going to get into trouble, people are going to talk. (It’s) nothing new.”

Lori Swindall, ex-wife of a police officer, said she read about crime in newspapers and watched a newscast. Meghan Mullins, 24, of Whitesburg, said she had read a little about the stabbing death, but not a lot. Kincer and David Estes, of Jenkins, both testified that they had read about it in a newspaper.

In filing a motion for a change of venue, two supporting affidavits are required. Jenkins residents Dustin Stanley and Michael Gibson signed affidavits stating it would be difficult to panel an impartial jury in Letcher County.

“I know with as much publicity it would be hard to find a jury with people that don’t know about the case,” said Stanley. “I know I heard about it a lot.”

Banks called Mary Stallard, of Cornettsville, to the witness stand and asked her if she could be unbiased in this case.

“Absolutely,” said Stallard. “Of course, there would be a number of people in Letcher County who could give a fair and just ruling on it.”

Stallard said she has friends who don’t read newspapers and don’t have access to the internet. Stallard referred to a 2005 study stating that 47 percent of Letcher County residents have internet access. Wright asked Stallard if she thinks the number of people with internet access could have changed in 11 years.

“I think it could be less because of the economic downfall,” said Stallard.

Hendrickson, who is the circuit judge in Harlan County, said he would take the matter under advisement before issuing an order.