Facebook ‘group’ hopes to shame county’s litterers into cleaning up 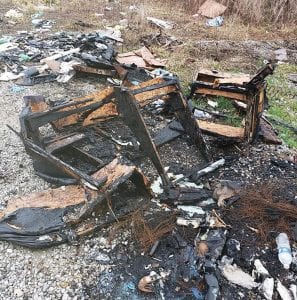 This photo showing burned junk was taken near the Letcher Garbage Transfer Station. It appears on the Facebook page, Letcher County Garbage Patrol.

Over at Flat Gap, a business has thrown out flyers for its payday loan company, and residents are sick and tired of picking them up out of their driveways and ditches.

Down on Elk Creek, Manus Blair has picked up two more bags of garbage, just as he’s done nearly every Saturday for more than 20 years.

And on top of Indian Creek Mountain, someone has created a garbage dump with burned furniture, junk and household trash just three or four minutes from the county garbage transfer station.

At Crases Branch, Frank Campbell is at the end of his rope. He and his wife, Debbie, started the Facebook page Letcher County Garbage Patrol in hopes it would draw attention to the problem and get some of the county cleaned up. A year later, the page has drawn 782 members, but the litter is still piling up, as are stories like the ones above, which are posted on the Garbage Patrol page.

“I was coming home from church one day, and there was a durn garbage bag right in the middle of the road,” Campbell said. “I got out and took a picture of it, and I said, we have got to do something.”

The Garbage Patrol was born. Since it was created, members have tried drawing officials’ attention to the problem, they’ve tried publicly shaming people who litter with photos of their cars as they litter, they’ve tried organizing cleanups, and still the litter keeps coming.

Campbell admitted it’s disheartening, but said he’s still willing to work at it.

“You can’t give up. It’s just one of those things you have to keep at,” he said.

Some of the problems are in curves in the highway, in particular the steep curve at the mouth of Blair Branch on Highway 7, which is apparently how long it takes to drink a fountain drink from the several restaurants in Isom, or the first place litterbugs can pitch out the cup without being seen.

Blair, a retired teacher, said he has picked up two 13-gallon garbage bags every other Saturday on a two-tenths of a mile stretch of road at Elk Creek for nearly three decades. It doesn’t get any worse in that length of time, but it doesn’t get any better either.

Blair said the county needs to enforce the rules that are already in place, and make people who litter pick it up again. He estimated it’s 25 percent of the population. He said as a middle school teacher, he had his sixth-grade students do a project on litter every year to try to teach them better, but it starts at home.

“I told them, ‘You already know if your people throw it out. You can tell by looking in their cars.’” If the cars are full of garbage at the end of the day, they’re taking it home to dispose of. If they’re clean, they’re throwing it out, Blair reasoned.

In the absence of parental guidance, however, both he and Campbell said the courts and county officials are going to have to decide if they want to make the county better.

“The week before they closed school, the girls’ softball team at Letcher Middle School picked up 94 bags of garbage from Letcher School to Blackey Bridge. Ninety-four bags of garbage — that’s terrible,” Blair said.

Campbell said all the officials are interested in getting litter picked up, but there have been few resources dedicated to the effort.

“The judge and some of them at one time said, we need to hire you as litter warden, but I don’t have my police papers anymore, I’m retired, and I don’t want to go back to school again,” he said.

Campbell said he would gladly volunteer to do it for free if he did not have to go back to academy, but said the county needs to put more litter wardens in place to make sure the job is done. Currently it has only one, and he is not a police officer. Gale Dean Campbell, who died last week, was a litter warden for many years, and was a certified deputy sheriff.