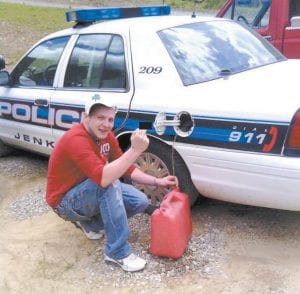 This photo showing Michael A. Baker of Mayking syphoning gas from a Jenkins Police cruiser resulted in Baker’s arrest after it appeared on Facebook.

A 20-year-old Mayking man was arrested Tuesday after posting an incriminating photograph of himself on the social networking site Facebook.

Michael A. Baker, of 497 Great Oak Road, posted a photo on the Internet April 12 of himself apparently siphoning gasoline from a Jenkins police cruiser. In the photo, Baker is kneeling next to a gas can beside a cruiser while his middle finger is extended on his right hand.

“I hope that shows people that anything you put on there is susceptible for people to see,” said Bormes. “There is always somebody watching. You shouldn’t do it anyway, but you shouldn’t put it on Facebook.”

Bormes pointed out that the stolen gas was paid for by taxpayers.

“(Police) knew how much gas was in (the cruiser) and quite a bit had been siphoned out,” said Bormes.

Bormes said the cruiser had been parked at a garage in Sandlick awaiting maintenance repairs.

In an interview with WYMT-TV, Baker said the photograph, taken by his girlfriend, was meant to be a joke. He admitted to siphoning gas from the cruiser, and said, “I got a little bit. I ain’t going to lie.”