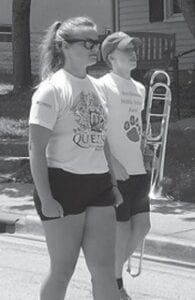 Katelyn Nottingham marching in the Fort Mitchell Fourth of July parade. This is her last parade as she is a senior.

How is everything in your little corner of the world? I don’t know which to ask, are you staying cool, or are you staying dry? We sure have been a mixture of both in the Ohio Valley area.

You can bet your bottom dollar I am not complaining of the heat. As I’ve written so many times before, I stay so cold in the winter that I can’t seem to get warm no matter how many clothes I wear.

I have to be honest. I do seem to breathe a lot easier when it is cool. I keep my small electric throw that my daughter gave me for Christmas on the arm of my recliner when I have the window air conditioner on.

How many remember growing up without air conditioners, or who was like our family, not even know what a fan was?

Mommy would open the windows and the doors. Of course the houses at Roxana where we lived had no screens for the windows or doors.

Homes had the wood and coal stoves for cooking, again no matter how hot. That meant a fire had to be built to fix meals.

Thinking back to childhood days, with doors and windows open, there weren’t flies in the house. Nowadays you can’t sit outside without flies or mosquitoes biting you.

There was something called gnats that would aggravate and bite you in the evenings, Mommy would build a small fire then smother it down. She called it gnat smoke.

Oh to go back to the simple times of childhood once more. At the end of Mommy’s busy day, there were times she would sit on the porch and talk about her growing-up days on Big Branch. How I am so thankful for those memories.

I read on Facebook, on this contraption called a computer, how times were for other families that are in the same age bracket as me. I think of how different things were. Mommy did the best she could with what she had, as taking care of the house, raising a garden and taking care of us children was all the life Mommy ever knew.

When I read of children being raised in church, again that wasn’t the way it was in my childhood. However I did go to church at Tolson Creek Church, which was at the mouth of Mill Branch. Minnie Whitaker took me the first time I ever attended church.

I also attended church that was held in Burchell and Catherine Jones’s home. Actually, when I heard Irene Jones Gibson play the guitar, I was addicted to going to church, just to hear her.

The only other times I heard someone play a guitar or banjo was my grandma Rosa Hall played claw hammer or drop thumb banjo when I was about three years old. I remember trying to dance.

My grandma Betty Adams Barton could play a guitar and banjo, along with my two uncles Boyd and Charles Barton. Of course sometimes when I was there they would pick and sing for a while.

If I could recall my life, I would have made sure I learned how to play a guitar. Mommy could change a few chords and play a little guitar.

I was reading something that a woman who lives in Harlan County, who is close to my age, wrote on Facebook. It brought so many memories of growing up. I guess it started a cavalcade of memories escalating through, as she wrote that her dad would mix hot bacon grease with sugar to pour over bread and eat it.

That brought back to the times that Mommy melted lard, mixed sugar in it, cut open a biscuit and that was what I would take sometimes for school lunch. Other times I would carry milk and cornbread in a small, four-pound lard bucket.

Sometimes I read of different things that were eaten as a necessity to survive. There’s always someone that says, “I would not eat that.” When you are hungry you will eat what is available.

Now don’t ask me where all this is coming from as I write this column.

My granddaughters Jessica and Katelyn Nottingham finally made it home safely after their wonderful trip to Greece. Somehow I have lost a year, as Katie is a senior in high school this year.

Be e chwood High marched in the July 4 parade. I didn’t even know it was happening until it was over. My daughter Anna Nottingham took a picture of the band, saying it was Katie’s last year of being able to march.

Sunday was Old Time Fiddlers. As usual my stomach was giving me trouble. I worked Saturday and didn’t go to the store to get things I needed. Thanks to my son Keith Ballard for getting groceries for me. I made potato soup for our meeting. I wasn’t expecting a crowd as a few of our members had other commitments.

Was I ever in for a surprise as we had 14 musicians, including six fiddle players, two mandolins, guitars, and a banjo. It would take all day to describe the joy I felt with all this going on.

One of our members is going through dementia or Alzheimer’s. It is so heartbreaking as she can remember back when her children were little and her working years at a bank, but doesn’t even recognize where she is.

She and her husband have been married over 60 years. They are both getting close to 90 years old. It was the first time they have been able to attend in a couple of months. Her husband has played music since he was young. My life has been blessed to meet so many wonderful people through music.

Please keep Johnny and Ann Calihan and family in your prayers as their daughter Carol Dieckman is not doing well at all. Carol’s son, Lee Dieckman from Colorado, is finally able in to visit Carol.

I had plans of coming to the mountains this week for a few days. I won’t be making the trip as I want to be here for Ann and Johnny.

Keith decided to remove the gutters, replacing the boards on the house. It is amazing what Keith can do. I had to laugh when Keith said he was learning as he would do things.

Saturday morning at four o’clock, I heard hammering. As I opened the door and looked up, Keith was on the scaffold with a small light on his head hammering nails in the boards. It was supposed to rain later in the morning and he wanted to get the gutters done. It is a good thing I don’t have neighbors. Everything is finished and looks great.

Now Keith is going to start on another project as he is putting an Allen block wall in the backyard. At least he knows what he is doing as he has done this kind of work.

I may need that trip to the mountains, as Keith has a huge hole dug in the backyard. If you don’t read my column, you might need to check on me.

Hello to Buddy and Bernice Grubb and to their son Chuck and I can’t forget Mike. I hope to see you before long.

Mike and Marcia Caudill, I can hardly wait until August arrives since Carcassonne Community Center will open with the first square dance on August 14. I am like a child waiting for Christmas.

Hello Les and Pat Wagner. I hope before long we can get together.

Tommy Tendell, I really don’t know if you received your birthday card so I think I will send you another.

I’m sorry, at the present I am not feeling well.