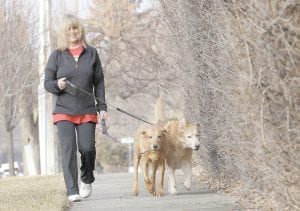 Donna Brent, 63, takes a walk with her dogs Madison and Harley in Deerfield, Ill. Brent says decades of racket ball, tennis, softball and other sports took a toll on her knees, but she got used to living with the pain, even when she became bowlegged and developed a limp. Nearly 1 in 20 Americans older than 50 have bionic knees, or more than 4 million people, according to the first national estimate showing how common these replacement joints have become in an aging population. (AP Photo)

Nearly 1 in 20 Americans older than 50 have artificial knees, or more than 4 million people, according to the first national estimate showing how common these replacement joints have become in an aging population.

Doctors know the number of knee replacement operations has surged in the past decade, especially in baby boomers. But until now, there was no good fix on the total number of people living with them.

The estimate is important because it shows that a big segment of the population might need future knee-related care, said Dr. Daniel Berry, president of the American Academy of Orthopedic Surgeons and chairman of orthopedic surgery at the Mayo Clinic in Rochester, Minn. He was not involved in the research.

People with knee replacements sometimes develop knee infections or scar tissue that require additional treatment. But also, even artificial knees wear out, so as the operations are increasingly done on younger people, many will live long enough to almost certainly need a second or even third knee replacement. 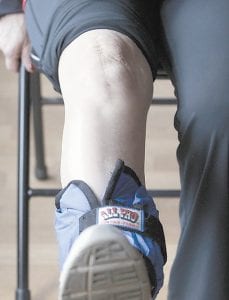 Donna Brent worked out her leg at her home in Deerfield, Ill. (AP Photo)

The new estimate came in an analysis presented late last week at the academy’s annual meeting in San Francisco.

“These data are sobering because we didn’t know what an army of people we’ve created over the last decade,” said Elena Losina, lead author of the analysis and co-director of the Orthopedics and Arthritis Center for Outcomes Research at Harvard’s Brigham and Women’s Hospital. “The numbers will only increase, based on current trends.”

Replacement joints can greatly improve quality of life for people with wornout knees, but they’re not risk-free and it’s a major operation that people should not take lightly, she said.

Modern knee replacements in the United States date back to the 1970s. Since then, advances in materials and techniques, including imaging scans to create better fitting joints, have made the implants more durable and lifelike, surgeons say.

Losina and colleagues came up with their estimate by analyzing national data on the number of knee replacements done from 1998-2009, U.S. census data, death statistics and national health surveys.

Overall, 4.5 million Americans are living with artificial knees. That includes an estimated 500,000 who have had at least two replacement operations on the same knee.

Knee replacements are most common in people older than 80 — 1 in 10 people in this age range have them, the study found. Though they’re less prevalent in people younger than that, there are still more than half a million Americans in their 50s with the artificial joints, and based on current trends, operations in that age group are expected to increase.

According to the federal Agency for Healthcare Research and Quality, knee replacements tripled in people ages 45 to 64 between 1997 and 2009.

Doctors think two trends have contributed to that increase: the nation’s obesity epidemic and amateur athletes who don’t adjust workouts to spare aging or even injured joints. Both can lead to or worsen arthritis, the main reason for replacing knees.

Donna Brent, 63, is in the latter category. The Deerfield, Ill., administrative assistant says decades of racket ball, tennis, softball and other sports took a toll on her knees, but she got used to living with the pain, even when she became bowlegged and developed a limp. When pain “started getting in the way of some of my sports,” she gave in to her doctor’s advice and had the operation last June on her right knee. She said she feels better than ever, is back to exercising and plans to resume tennis and softball when the weather warms up.

During knee replacement operations, surgeons slice off a small portion of the worn-out surface on the ends of both leg bones that meet at the knee, then implant an artificial joint usually made of plastic or metal. Typical operations last about two hours, require a few days in the hospital, and cost roughly $40,000.

Artificial knees generally last 15 to 20 years. While some are promoted as lasting 30 years, these estimates are generally based on use among older people more sedentary than baby boomers who expect new knees to let them be as active as they were before surgery.