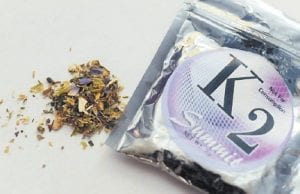 This file photo shows a package of K2, a concoction of synthetic marijuana made of dried herbs sprayed with chemicals. Authorities in 13 states thought they were acting to curb a public health threat when they outlawed K2. But even before the laws took effect, many stores that did a brisk business in fake pot had gotten around the laws by making slight changes to K2’s chemical formula, creating knockoff s with names such as “K3,” “Heaven Scent” and “Syn.” (AP Photo)

Authorities in 13 states thought they were acting to curb a public health threat when they outlawed a form of synthetic marijuana known as K2, a concoction of dried herbs sprayed with chemicals.

But before the laws took effect, many stores that did a brisk business in fake pot had already gotten around the bans by making slight changes to K2’s chemical formula, creating knockoffs with names such as “K3,” ‘’Heaven Scent” and “Syn.”

“It’s kind of pointless,” said University of Missouri sophomore Brittany May after purchasing a K2 alternative called “BoCoMo Dew” at a Columbia smoke shop. “They’re just going to come up with another thing.”

The synthetic marijuana is banned in Kentucky, but not in neighboring Virginia.

Barely six months after Kansas adopted the nation’s first ban on K2, even police acknowledge that the laws are all but meaningless because merchants can so easily off er legal alternatives.

Until a year ago, products such as K2 were virtually unknown in the United States. Clemson University chemistry professor John Huff man developed the compounds in 1995 while researching the effect of cannabinoids, the active compounds found in marijuana.

Huff man had little reason to believe his lab work would morph into a commercial product. He calls users of K2 and its chemical cousins “idiots,” noting the lack of research into the substance’s effects, which include reports of rapid heartbeats and high blood pressure. It’s often labeled as incense with warnings against human consumption.

Yet Huff man has little faith that the bans designed to combat the problem will deter manufacturers or consumers.

“It’s not going to be effective,” he said. “Is the ban on marijuana effective?”

He also doubts that law enforcement agencies will be able to devote the necessary resources to identify such complex creations as “1-pentyl-3-(1-naphthoyl)indole,” the substance’s scientific name. The compound sold as K2 is also known by the scientific shorthand of JWH-018, a nod to its creator’s initials.

“The guy in the average crime lab isn’t really capable of doing the kind of sophisticated tests necessary” to identify the substance, he said.

Missouri state Sen. Kurt Schaefer, a Republican from Columbia, acknowledges that the marketplace has quickly adapted to his state’s ban. He also firmly believes that the new law, along with a wave of media reports, is an effective deterrent, especially for potential users under 18, and their parents.

“We’ve at least minimized the threat to public safety,” he said.

The Missouri statute identifies five synthetic cannabinoids by name, but leaves out many others.

Police and public health experts say that users seeking the more benign high associated with marijuana may be unprepared for the synthetic version. Users of K2 describe a more intense but shorter high, with effects lasting about 20 minutes as opposed to several hours.

Schaefer said lawmakers may consider a broader ban next year if the law proves ineff ective. He also drew a sharp distinction between synthetic marijuana and the natural alternative.

“No one should confuse this product with marijuana,” he said. “This is guys standing around in a factory wearing rubber boots and spraying chemicals on dried leaves.”

The state bans were enacted starting in March. Similar proposals are pending in New York, Ohio, Indiana, Michigan, New Jersey and Pennsylvania. And many local governments have enacted their own prohibitions.

But new laws have not prevented a seemingly brisk online business. The website K2Fast.com, for instance, touts its ability to “ship fast to any state” while noting its product does not contain JWH-018, the ingredient that was just made illegal.

Micah Riggs, owner of the Coff ee Wonk in Kansas City, said his business is just as good, if not better, since Missouri’s ban took effect. He says his newest blend is stronger and has a smoother taste than the banned form of K2. It’s been so successful that Riggs is considering expanding his operations to Florida and New York.

“I researched this stuff pretty heavily before I started selling it,” he said. “I’m not just going to take a risk with people’s health.”

The Georgia Poison Control Center has seen just a “trickling” of K2 cases since legislators outlawed the product in May, said Dr. Gaylord Lopez, the center’s director.

Lopez, who visited several Atlanta stores that continue to sell K2, said he was not aware of an increase in knockoff products since the ban was enacted. He said the trade in K2 has just “gone underground” now that it’s illegal.

“If you play the part, and don’t look like a DEA agent, they tell you they still have it,” he said.

In Columbia, a smoke shop called BoCoMo Bay saw a surge of interest in K2 and its legal alternatives around the time legislators began discussing a ban.

Owner Kevin Bay said his loyal customers include factory workers, computer technicians, even soccer moms. The substance is also popular with people who must submit to drug tests such as firefighters, police officers and people on probation.

Bay estimates that he sells an average of 80 bags a day of the various blends, which cost $25 for three grams — similar to the street price for low-end marijuana. Demand is so high, it takes four employees working four-hour shifts, three days a week, to package the 2.2-pound bulk shipments into smaller servings.

Bay, who testified against the K2 ban at the Capitol in Jeff erson City, calls the effort to ban the substance another losing battle in the war on drugs. If lawmakers adopt a broader law, that will just promote more innovation in the laboratory, he predicts.

“You can’t prohibit something that hasn’t been invented yet,” Bay said.

Police in the college town off er similar observations. Since there are no reliable field tests for K2 and its cousins, identifying the substance is “nearly impossible” unless it’s packaged with a K2 label or the person carrying it confesses, said Jill Weineke, a Columbia police spokeswoman.