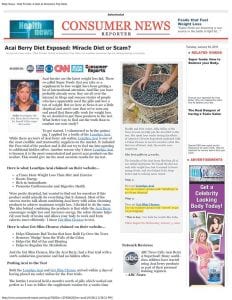 This image provided by the Federal Trade Commission shows a screen shot of a web site using a fake news site to promote acai berry weight-loss products. It was used it as evidence in a case filed by the FTC. Federal regulators moved to stop a wave of fake news sites that entice consumers to buy the products in complaints filed in federal courts. The FTC says the sites use the logos of major news outlets to mislead consumers into thinking they’re reading real news reports. (AP Photo/Federal Trade Commission)

Consumers searching for unbiased journalism on the acai berry diet clicked their way into a scam, according to federal regulators who have filed lawsuits in six states in an attempt to shut down the alleged Internet tricksters.

The Federal Trade Commission is asking federal courts to stop a wave of fake news sites that entice consumers to buy the unproven weight-loss products.

The sites violate federal law by using the logos of major news outlets to mislead consumers into thinking they’re reading real news reports, according to the court filings. In reality, the sites are advertisements.

The FTC has filed complaints in federal courts in Illinois, Michigan, New Jersey, New York, Georgia and Washington. The complaints named 10 website operators and asked the courts to freeze their assets.

The defendants paid more than $10 million to advertise their fake news sites, the FTC said. It’s not clear whether the defendants allegedly running the sites are connected, although content on the sites is similar or the same, said FTC attorney Steven Wernikoff in Chicago.

“ We’re still trying to figure that out,” Wernikoff told The Associated Press. “There was some copying of content going on. Regardless of the genesis of the content, the operators are still responsible for the deception on their sites.”

Courts granted temporary restraining orders in some of the cases and many of the websites have been taken down.

One typical lawsuit alleges that Tanner Garrett Vaughn of Mill Creek, Wash., claimed on a website called BreakingNewsAt6. com that a reporter tested an acai berry product and lost 25 pounds in four weeks without dieting or exercise. The FTC claims no real reporter tested the products.

Vaughn is cooperating with the FTC and the website is no longer operating, said Vaughn’s Washington, D.C.-based attorney James A. Kaminski.

“It’s our position that the defendant has done no wrong,” Kaminski said.

The Illinois attorney general’s office filed a separate lawsuit against Ishmael Lopez Jr. of Sauk Village. The office alleges Lopez used a fake news site to promote acai weightloss products. A phone listing for Lopez could not be found.

According to court filings, the scam worked like this:

A consumer types “acai” into Google or another search engine. An ad pops up that says, “Health Reporter Discovers The Shocking Truth.” Clicking on that link leads the consumer to a fake news site featuring a first-person story about a fake reporter’s positive experience with the diet products. One more click and the consumer lands on an ad offering a “free trial” of an acai berry supplement.

The FTC received multiple complaints from consumers who paid from $70 to $ 100 for weight- loss products after having been duped by the fake news sites.

Acai, a popular beverage flavor, is a dark purple fruit from a palm found in Central and South America. Marketers sell a diet supplement purported to contain acai, often selling it with a separate “colon cleanser” product.

Last year, the FTC filed a separate lawsuit against a Phoenix-based company for using fake celebrity endorsements for acai berry products. In that case, still under way, Oprah Winfrey and Rachael Ray filed statements with the court denying they’d ever endorsed the products.