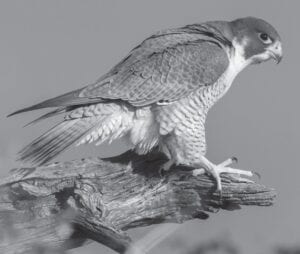 Last Friday, noonish, I was sitting on the front porch soaking up the last warm day we’re apt to see for awhile, when Loretta stepped outside to bring me a cup of just-brewed coffee. I’m lucky she didn’t spill half of it in my lap because she was no sooner put the door than she began exclaiming, “Look, look, look at that beautiful hawk in the garden!”

The garden, at least what little is left of it, is only a few feet directly beside the left side of the porch and by the few seconds it took me to spot the bird, it was ready to take flight. Suffice to say that my wife has no future career as a wildlife stalker. A pet cat would have taken flight at all the commotion she was making.

In the meantime, I was wondering where the peregrine falcon had come from and what was it doing in my late cabbage plants. (The cabbage plants are something else that have no future unless you count them as green manure but my buddy, Ralph King, brought them to me in early October and my brother, Andy, felt obligated to stick them in the garden. And, hey, it is still 2020 so you never what will happen to them.)

The only thing I know for sure is that, for a scant few seconds, I was staring down a peregrine falcon. It would be difficult to miss identify one in broad daylight when it was standing fewer than 20 feet away and didn’t seem to be in any particular hurry to leave. Our yard is infested with voles and/or moles and I suspect the falcon had found an easy meal. I’d be willing to build it a perch if it wanted to take up residence.

I know that there are nesting peregrines some 20 miles away on Herrington Lake and I’ve been told that they are frequently sighted much closer by on Silver Creek and several other nearby larger bodies of water.

It’s also not uncommon to spot other birds of prey off our front porch. We have seen bald eagles on numerous occasions. Three years ago we had an osprey hanging around for a couple of weeks and we still see it every now and then. Redtail hawks are with us nearly every day and a friendly Cooper’s hawk often lights on the roof of Loretta’s she shed located on the opposite side of the garden. I hear both barred and great horned owls talking to one another nearly every night within 200 yards or closer to the house, but the falcon was a rather pleasant surprise.

It’s a very common sight to spot one sort of raptor or another perched on a dead sycamore limb directly in front of or right beside our house. We also see one or another varieties of hawks utilizing the same habitat nearly every time we make a daylight trip to Berea, Richmond or Berea.

This is a tad off the subject, but I’d like to know why the sycamores are dying in our neck of the wood and whether other folks in other places are experiencing the same phenomena. It seems to be a rather slow death that starts in the topmost branches and works its way down.

One larger sycamore beside our house is nearly completely dead now and its demise has been 20 years in the making. Two others that tower upwards of 100 feet tall directly in front of the house have been noticeably dying for the three or four years to the point that their top 20 feet have already become leafless skeletons.

Without trying very hard, I counted 26 sycamores on a seven-mile stretch alongside Highway 21 between Paintsville and Berea that were in various stages of death and decay. A couple of them are so tall and the limbs so large that they are rapidly becoming dangers to the traveling public.

If anybody knows what’s going on with the sycamores, please let me know, not that I can do anything about it. I’m reasonably sure this one can’t be blamed on COVID-19.