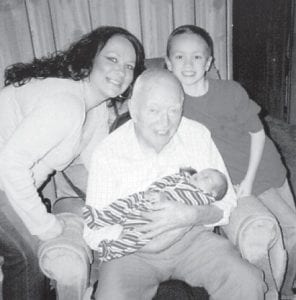 Noll Davis, 95, of Dunham, holds his great-great-grandson, Trenton Zayne Hicks. The baby was born December 13 to Cara Davis Hicks of Pikeville, who is also pictured with her older son, Trevor Hicks, 9. She is the daughter of Debbie and Boyd Davis of Dunham.

Wow — what a great day we had this past Saturday, 60 degrees and sunshine. It gave us a little break from the bitter cold and a taste of upcoming springtime.

Becky Blair is doing pretty well after her recent gallbladder surgery. Mary Jane and Tim helped out with Walker and Isaiah while she is recuperating. They had the boys at Mount Olivet Church at Blackey with them Sunday.

Merle Caudill has gotten out of the hospital and we hope he is feeling better.

Former Doty resident Hubert Caudill recently died in Indiana at the age of 84. He was a brother to Coman and Lonzo of Doty Creek. His sisters, Vina and Opal, live away as does his wife Janis and their children. Our sympathy to them and all of his family members both in Indiana and Kentucky. Due to the bad weather, not many from here could attend his funeral.

Although I never knew him personally, is his photos he looks so much like Coman and it seems according to his obituary he was an active gardener, walker and “outdoorsy” fellow, which probably stemmed from his growing-up years. And that his love for God and his family was foremost on his mind. That is the way most of us “mountain” folk were raised and even more so in the generations before us. A love of God, family and the land has been instilled in our people for many generations, but times have changed in the last 10 or 15 years and I don’t mean for the better.

We hope Teresa Hylton’s mom, Rose, is doing better after a recent fall and surgery to repair the broken bones. She has been in Pikeville Hospital recuperating. Rose’s husband, Claude Hensley, grew up in Isom and the last time I talked with him was at Johnny Holbrook’s funeral service.

Donna Frazier, Lela Back, Lowell Banks, Gaynell Back and my dad, Don Pridemore, are a few that recently had birthdays. Hope all had a good day.

We had dinner for Dad after church Sunday. Coreen did the cooking and we also brought food, cake and ice cream in so there would be plenty.

Last Friday, I, Coreen and Don went to Somerset to visit Mom’s sister, Juanita, and her husband Vince Mc- Crarey. They have been having health problems lately and their daughters, Deb and Alma, were there helping them out. It’s always good to have family to help out in hard times.

Bob stopped in to visit Robert Holcomb after his surgery. Diane was taking good care of him.

On Sunday, Bob also checked on Gillis and Marie Reedy and Bill and Joyce Adams.

It was fun to watch Tyler Watts and his students on the Government Channel. He takes a big interest in his students and seems to be a good young teacher.

I didn’t know that Mitchell Dale Caudill had his hip replaced last November, but am so glad to he did well with it. It helped him to have less pain and to walk better.

I see his sister, Sharon, visiting with Vada at the nursing home, but seems I don’t find time to talk and catch up with their family.

Ora Whitaker’s children have been staying and helping their mother while she has been having health problems. They are a close family, known and loved throughout the area, and take good care of her.

Mark and Nikki Stone had a working at the C.B. Caudill Store to clean up an apartment for his mother, who lost her home to a fire. Hope they had lots of help Saturday and got the place ready for her to move in.

The Mount Olivet Church had a full house on Sunday. I think the large congregation was due to the weather being a little warmer and all were ready to come out and worship since it has been awhile that there wasn’t ice and snow on the roads. We had a good service that day and it was also good to see neighbors and friends.

At Saturday’s evening service, we all signed a card for Lilly Blaine and Helen Cornett, who haven’t been able to come in from Falmouth for a couple months.