Fall is coming to Ohio Valley 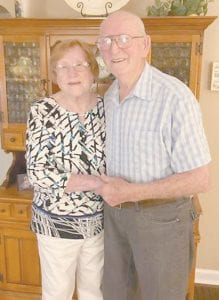 Hello everyone! Once again grab a beverage and let’s take a break and chat for a few minutes.

As I look across the hayfield as so often I do as I write my column, you can tell fall is on its way as the grass isn’t growing quite as fast plus there is a chill in the air when I open the door to peek at the first sign of birds when my son Keith refills the bird feeder.

We are still having hot weather, which I am thankful for as it is no secret I really don’t care for cold weather.

For once I am really thankful that I still have window air in the house. I’ve spent the last two months sleeping in the recliner, and I can turn the air conditioner down as it seems to settle in my wrist and ankle.

I have kept my electric blanket over me, even though I had my ankle wrapped with a bag of frozen vegetables.

As usual I am still hobbling around. I almost fell in the floor this morning.

My left foot has taken a beating the last couple of months, now I’ve gotten a visitor that I would like to get rid of, named arthritis. I guess I will have to cheat on him with Ben Gay.

I went back to the orthopedic doctor. I was released, unless I need him. He gave me a cortisone shot in my right knee, as I have bone chips on the kneecap from my knees hitting the dash of my car.

I can go back every three months for another shot . I wish he could give me one in my right ankle to ease the pain.

I’ve had several tell me that everything happens for a reason. I whole-heartedly disagree, as I don’t believe for a second that God intended for this person to pull in front of me and to bring me down to the condition that I can hardly take care of myself, and not to my knees as they have bone chips in both kneecaps.

I do believe in God with all my heart, and without the grace of God you would be missing my column.

Actually I don’t recall writing the first couple of weeks after the accident. I am going to go back and check what I sent to The Mountain Eagle.

I do appreciate the cards and get well wishes. I know one thing somewhere between my house and Lexington, the mail seems to disappear, even with a return address.

When Bertha Turner was in the hospital, I sent a card to cheer her up. Bertha never did get it.

I received a card from Gladys Smith from North Carolina. She used to write a column for The Mountain Eagle. Gladys broke her left ankle six years ago, and spent eight weeks in a nursing home. Gladys said she still has a lot of pain.

It was really nice to hear from Gladys as we had a mutual friend, Oma Hatton. Gladys and Oma corresponded by telephone, and she sure misses Oma. I had the pleasure of meeting Oma and could call her my special friend for several years.

Through the years of writing for The Mountain Eagle, I have met so many wonderful people. I can say the same with being involved with bluegrass music.

I am still griping and complaining not being able to go to Osborne Brother Festival at Hyden. I heard so many amazing comments of what a great show Sunrise Ridge did. That is no surprise to me. However there is something about an outdoor festival that seems to make it super good. The shelter that was built sure helps from the heat although I love the sun, the breeze and whatever goes with it.

To have missed Sunrise Ridge and Larry Efaw & Bluegrass Mountaineer bands booked back to back, was more than I could bear. If God is willing I hope Dean Osborne will repeat the same way of booking.

I’ve known Larry Efaw personally for several years. Larry is one of the finest guys you will ever come in contact with. Larry and his wife Lisa have invited me to have supper with them in their motor home. They are never too busy to spend a little time with anyone.

For years Larry’s dad was active in the band, then his son Stanley Efaw. I bet in the near future he will have a grandson performing with the band

My sympathy goes out to the family of Merlene Davis Day as she took her final journey. I remember Merlene as far back as memory serves me, as a child going to school at Mill Branch. She was the daughter of Thurston and Maxie Davis. Mom knew Thurston when she was young.

I hadn’t seen Merlene in years, however we corresponded back and forth for quite some time. I remember several of her siblings, that is how far my memory takes me.

Kevin Day has become such a special person as I listen to him at times on the radio, along with his son.

At one time my ex-husband Clayton said anyone from the mountains was a clique. I wouldn’t go that far to agree, as I find I hold dear the memories of certain things from my childhood. Especially the ones that were good to me.

There’s one thing, I have never got above my raising, and will never change my heart by caring for others.

It seems there’s been a lot of sadness in such a short time, my sympathy to those that have lost loved ones.

Libby Smith’s sister Doris is in ill health. Please remember the family in your prayers.

From what I hear, Fred and T. Campbell’s dad is improving a little. He is taking dialysis for his kidneys. Darlene and Alice are more than in-laws as this is a close-knit family. Please keep him and the family in your prayers also.

Richard Cornett of the Dayton area sent me information about a family named Wheatley, originally from Wood Rock in Blackey. My condolences go to the family of Winford and Wayne Wheatley and their sister Elaine Wheatley Narcross, who lives in Decatur, Texas. One morning Elaine discovered her husband John Narcross dead in their swimming pool. I don’t have any more information.

I remember Winford and Wayne as they were friends with my uncles Boyd and Charles Barton. My grandmother knew the Wheatleys, a family named Hatton, and Walter and Fostoria Blair, all from the little place called Woodrock.

There’s so much tragedy that goes on that it is heartbreaking to turn on the television or read a newspaper.

I finally connected with Les and Pat Wagner. I should have known Pat wasn’t up to par when it would go a period of time that she wasn’t calling me. I am sorry that Les and Pat both are having health issues. As I said, you think you have it bad, but there’s always someone else in the same predicament.

August 16 would been two dear friends of mine, Gwen Huff Farmer’s and Ollie Hayes’s birthday. They both have been gone for a few years.

Daphne Korner and I planned on going to see a band called Back Porch Hounds with Dale Farmer, a friend and local musician, who produced a video called Mountain Minor, which has been shown in several States. I cannot understand why the Appalshop doesn’t pick up this movie and show it.

Aug. 20 our mother Ora Hall has been gone 24 years. It is ironic as the time crawls, then other times has gone so fast. Mommy gave me a paring knife that she had used for several years, making the blade have a curved indention. Mom actually gave it to me over 25 years ago. Last week I wasn’t feeling good and decided to make a peach pie before the peaches ruined, and in a confused state of mind, I put the knife in the garbage along with the peach peels. I have made myself sick grieving over something that can’t be replaced.

School has started in this area. My sidekick Bennie Wiederhold is 12 years old and in seventh grade this year.

I honestly don’t know how parents with big families afford to send kids to school, not to mention buying clothes. If they aren’t dressed in today’s fashion they are made fun of. I know one thing, Mom would have burned every rag we had if we tried to dress in ragged jeans that showed your body.

Well I am sorry this column is not very cheerful.

When I was in the mountains while attending the Sacred Harp shape note singers, I mentioned meeting a couple of people. I got a friend request on the computer from Hillevi Lasen from Finland, and she really enjoyed the Carcassonne Square Dance. I wish I had met her as she stayed at Calvary Campus.

Love your wife but leave your neighbor’s wife alone, this could be written differently; love your friend, leave your friend’s wife or husband alone. I would like to take a survey on broken homes, except I can’t count that far.