Fall is just around the corner 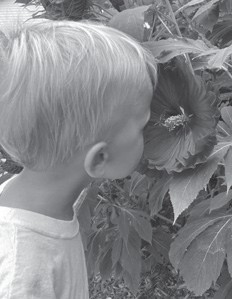 Hank is taking time to smell the hibiscus. He is the grandson of Tim Day and great-grandson of Hayward Day. Southern Ohio correspondent Rose Ballard said, “I bet the flowers are in Hayward Day’s yard as he had the most beautiful hibiscus I have ever seen.”

On this foggy morning the temperatures are rather cool in this area of the Ohio Valley area.

Labor Day weekend is once more just a memory. It sure seemed to sneak up fast. Oh, I know time waits for no one.

I hope it has been a safe holiday for those who have ventured the highways, as you really take your life in your own hands when you venture on your journeys, especially on the crowded interstates.

Labor Day slipping away is just another reminder that fall is just around the corner, then again we face months of cold dreary weather. Oh what am I saying? The feel of fall is already in the air.

Metamora, Ind. held its usual Labor Day event. It was wonderful this year. I believe I enjoyed it more this year than ever before.

That’s one advantage of traveling alone. You don’t have to worry about anyone but yourself.

Saturday, I arrived early and stayed late, except I wasn’t anticipating staying as late as I did. I had parked a distance from the stage You heard the expression, a moonlight stroll, well I definitely know the meaning, except I had to carry a chair which also became support for walking, since I was using my cane in the right hand. 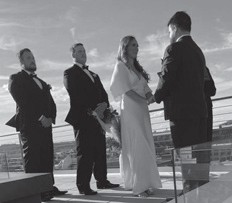 Under the watchful eye of her two brothers, Jacob and Caleb Day, Kelsey Day is married to Nick Miller. Congratulations, Kelsey Day and Nick Miller. Kelsey is the daughter of Tim Day, granddaughter of the late Hayward Day. Hayward would have been so proud.

At first the walk seemed eerie, however it was along the canal and I relaxed and enjoyed the walk, trying to concentrate on keeping my balance. I didn’t want to go for a moonlight swim, although I wouldn’t have been alone, there were ducks in the water.

Even the drive from Metamora was very nice. Yes, I was driving at night without anyone’s permission. Right, Daphne.

The music was really good this year. Saturday was a difficult day as I received some bad news as I was pulling in the parking place at the festival. I decided to push it on the back burner, put on a happy face and make the best of the day.

It worked until someone showed up who once was a friend. Oh I forgot to mention, I even forgot to put my spade in the car.

I decided not to let anything stop me from enjoying the day. I really did go prepare. As last year was sort of cool, I wore a sweatshirt and took a small throw and I was as comfortable as I could be.

Someone had donated the fund for a huge tent which came in handy as it rained a dab. This is the first time that I’ve seen a tent.

Since I arrived early I got a front row seat, in fact I almost left my chair, but I was afraid of something happening that I couldn’t go back Sunday.

Saturday, Ma Crow & Co. performed. I was in for a surprise as I enjoyed getting to see Dale Farmer perform two times.

Sunday was a beautiful day, and the music was very good. Jericho Old Time Band and Pine Ridge Partners played back to back. Both groups feature Warren and Judy Waldron.

Sunday, a performer from England, Jan Bell, was featured. I had never heard of her. Jan made a huge impression on me. Before the evening ended it felt as if we had known each other forever.

Jan is not exactly a bluegrass singer, as she does a lot of different music. However she has a beautiful voice and is a famous musician. She admires, Loretta Lynn, Dolly Parton, Jean Ritchie, and Hazel Dickens, which are in the same genre that I love.

Jan gave me the last CD she had with her. I hope I will be able to see her again in concert somewhere close.

Jean Dowell and Dale Farmer performed together. I had never met Jean before, and, oh, did she ever get my attention. Jean writes her own songs. Her CD is wonderful, just simple music and her singing.

As I sat in the crowd listening to so many who were performing their own words, there I sat with a pad of paper and pen in my hand, knowing I have the ability to write, yet have never taken the time to try to find someone to do something with my writing.

Now the years are slipping away. When I am gone my kids will have a bonfire with my writings as I have boxes on top of boxes of poems that no one has ever seen.

For those of you that are curious why Daphne Korner and I aren’t traveling together anymore, the plain and simple truth is Daphne thinks I am dangerous because I carry a spade in my car!

I have been known to pull hair in my younger days but not able now. I don’t have the strength to dig a hole to plant my flowers, much less dig a hole in the mountain to bury a body.

Johnny and Ann Calihan are enjoying being home together. They were separated for a month due to Ann breaking her femur and being in rehab, then Johnny was in the hospital two times. Please keep the Calihan family in your prayers.

Hello Buddy and Bernice Grubb. Mike, I sure could use a hug right about now. Oh I forgot, I did get hugs at the festival. Oh heck, those are gone already.

Pawpaws are going to be ripe soon. I sure am going to miss Hayward Day, as he always made sure I had pawpaws to share with Ann Calihan. We did give Johnny a couple.

One response to “Fall is just around the corner”