Fall is never around long enough 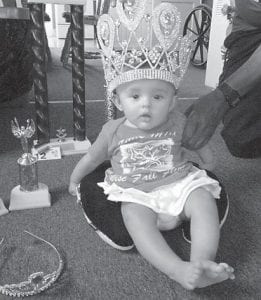 Audriana Lowe was named Miss Congeniality, first runner-up Princess, Best Dressed and Best Smile in the 6-11 month category of the Little Miss Fall Fling Pageant in Wise, Va. She is the daughter of Kimberly Thompson and Brian Lowe of Whitesburg. Her grandparents are Truman and Juanita Thompson and Arnold and Della Lowe, all of Whitesburg.

Oh these beautiful days we are enjoying here in the Ohio Valley area! How I would love to slip away to head for the mountains of eastern Kentucky or the Smoky Mountains.

It is almost as pretty in this area with the glorious colors of autumn, just not the effect and the comfort of being snuggled between the mountains.

My only gripe is that fall doesn’t seem to last long enough as the foliage comes on and then a heavy rain and wind and it is gone. Then the trees are bare for so long as Old Man Winter sets in with a vengeance.

When I spent time with my brother Richie and Wanda Hall, I would get up early to sit on the porch just to gaze upon the mountainside that faces the front of their house. I will never forget the peaceful feeling of being in their kitchen with the French doors open, hearing the rippling flow of the creek running along the back of the house.

Richie decided to build a room, and cut off the view and the trickling sound of the water.

There are not many days that go by that I don’t want to pick up the phone to talk to Richie. I miss my brother Wallace Lee and my sister Loretta too.

Each time I turn my computer on I see Gwen Huff Farmer’s picture and I want to click on it to correspond with her as we would spend so much time writing to each other.

While cleaning out some papers I found cards from Willamae Boggs. I miss Willamae more than anyone will ever know.

Blackey Days will be a memory by the time this column is out. I’ve enjoyed this event so much the last two years.

Though I am not from Blackey I seem to fit right in as my grandmother Betty Barton lived in Woodrock when I was a child, and of course Mom and Dad lived there for many years.

Wednesday, I had a very busy day and was almost bone tired. As I was on my way home I got thinking about Betty Ison and without calling I decided I would pay Doyle and Betty a visit.

Betty is recuperating from a knee replacement, and she is still in quite a bit of pain, so here I go to check on her. As I was driving through Lawrenceburg I thought about stopping at KFC and picking up supper for them, then realized I didn’t have enough money with me.

Was I in for a surprise, as I was the one in for a treat.

While I was visiting with Betty, Doyle was in the kitchen and he had cooked soup beans, along with fresh-picked mustard greens and made cornbread that would melt in your mouth.

I was teasing about just picking the greens by himself!

I believe those were the best tasting mustard greens since Mommy used to cook them. If I had done what I was tempted to do, I would have sneaked off with the leftovers.

Doyle and Betty’s home is the only place that I will go into their kitchen and get a Coke or a bottle of water.

When I wrote the column last week, my thoughts weren’t where they should be as usual for me.

I owe an apology to Les and Pat Wagner as I completed omitted their names from those attending the Letcher County Picnic. Les and Pat, I am so very sorry for leaving your names out.

After that mistake I think it is about time for me to take a leave from writing for a while.

I checked down over my list before I sent it to The Mountain Eagle, and still made the mistake.

Friday afternoon, found me on the road again. This time my destination was the mountains. I met my sister-in-law Wanda Hall and Marlene Cornett at Campbell’s Branch Community Center. I think the band was Bits & Pieces.

Alice, you are such a sweet person, I hope I didn’t get the band wrong. The music was very good.

Everyone was in for a surprise; a group called The Poor Pistols is touring through several states and Kentucky was one of them. The Poor Pistols are made up of four beautiful young ladies from Canada, Steph Wightman, Jessica Taylor, Karley Bracey, Heidi Fiheld. They’ve only known each other a few years, and are very good musicians and have beautiful voices.

The Poor Pistols flew in to Tennessee then rented an RV stopped by the Appalshop and Jim Webb told them about Campbell’s Branch. Everyone enjoyed the girls being there and the girls had a good time.

After an evening of fun, I spent the night with Wanda. It is very difficult walking in the door and not having Richie lying on the couch.

Wanda and I enjoyed some good memories and finally sleep wouldn’t leave me alone as I became rather tired.

I went to Blackey Days, then later in the day Wanda and Marlene joined me. It was a picture perfect day, the weather was glorious, and the music was so good. It was one of the largest crowds I’ve seen in the three short years I have attended this event.

I met several new people, and I hope I don’t mix or forget names, Vicki Blair who is Ted Amburgey’s daughter; Joann Back, who reads my column; Nancy Oakes; Ernestine McIntyre; and Merle Landrum, who I was trying to entice to grab a coconut cake and head out back of the building to share with a cup of coffee, until I found out he was Oma Hatton’s cousin and a Baptist preacher.

Actually Merle was doing the enticing, and I was just going to help him. Well, we were going to share!

Merle has a daughter who is a nurse and lives in Alaska.

I spent a little time talking with Winfred Wheatley who lives in northern Kentucky. I remember Winfred from when I was a child about 10 or 11 years and younger.

Winfred was friends with my uncle, Charles Barton.

Richard Cornett, who makes his home in the Dayton, Fairborn area or somewhere, was at Blackey Days also. Richard is a brother to Jim Cornett who writes books. Jim said I ignored him, which I really didn’t mean to do.

Wayne Blair from Indiana came to watch the square dancing as he had been to Alice Lloyd College to some event. I know Jack Adams played there also.

Bev and Jeff, I am sorry I didn’t get to spend much time with you either. Jeff, I know you are saying a little time was enough.

Ardelia and several girls and I were all too busy dancing to socialize. I didn’t mean to be rude. You know how older ‘girls’ are, we just want to dance!

Annabell Wright and Berma Matthews, I am sorry I didn’t get to spend more time with you.

I met Wayne Watts, which was a pleasure for me, as Wayne has served our country in Saudi Arabia. When this was going on, I wrote a poem, sent it and a Christmas card to all the soldiers’ names that were in The Mountain Eagle.

For the finale of Blackey days, there was a fireworks display.

Shawn Stamper hugged me, just as the fireworks went off, and I laughed so hard when I told Shawn I had been hugged before but had never seen fireworks.

I really admire this kid. He is young enough to be a mentor to his daughter Whitney and Jack Adams, and old enough to give them good advice.

I really think Sunrise Ridge has a great thing going, along with Taylan Combs.

I stayed for part of the square dance, and oh how I longed to get in the group. I didn’t want to horn in, and was afraid I didn’t have the zest for a complete set.

I left a little early to go spend time with my brother Jerry and Mattie Hall, and as I was heading for the door the band consisting of Lee Sexton, Jack Adams, Shawn Stamper and another musician played a good, fast tune.

I had my purse in my hand and was headed out the door, but my feet went one way and my purse sat in a chair as I danced one last dance. For a few minutes it felt like I was in seventh heaven and all cares and worries slipped away.

Sunday morning, I sneaked out of Jerry and Mattie’s and came home.

Sunday afternoon, I had special visitors stopping by to see me. Marty Hollins and his lovely wife from Georgia were in the Amelia area for a class reunion and to see family.

Marty is a cousin as Marty’s grandfather Harlan Hollins and my grandmother Rosa Hollins-Hall were brother and sister. I feel as if I have gained a son and daughter with becoming acquainted with Marty and Sharon.

Hello to Les and Pat Wagner, Larry and Becky Hasty, Polly and Doodle Bug Kelly, to my almost new young readers from the Whitesburg area, John and James Ison.

It is time for me to get this on its way, and I am tired. Oh, I wonder why?