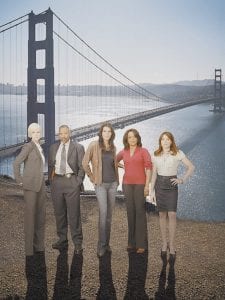 It’s one of the tantalizing questions of the moment and, if Hillary Clinton becomes the Democratic presidential nominee, at least through the 2008 election: How much does gender matter?

It’s made campaign coverage vivid in the early going, with the media and blogosphere agog over Sen. Clinton’s cleavage. There hasn’t been this much decolletage talk since Katie Couric became CBS anchor – oh, wait, that debate was over whether she would or should show her gams.

Maybe it’s coincidence, maybe it’s television’s fondness for a marketable trend, but networks are pushing the gender gap hard next season, airing nearly as many new male or female-focused series as there are shows with a supernatural edge (no link between the two, for now).

In this corner, wearing any color but traditional pink, are the ladies. There’s “Women’s Murder Club,” an ABC drama about four women, including a detective and district attorney, collaborating to solve crimes. (The show is based on a series of books created by author James Patterson.)

“Cashmere Mafia,” also from ABC, is about four high-powered women, friends since business school, juggling their personal and professional lives. NBC has the midseason “Lipstick Jungle,” about three high-powered friends, and a remake of “Bionic Woman.”

Even returning shows are feeling the spirit, with one displaying interesting political timing: The new U.S. president on Fox’s “24” will be a woman, played by theater heavyweight Cherry Jones.

Shows getting in the ring for the gents include ABC’s comedy “Carpoolers,” about four guys who bond on the drive to work.

“Big Shots” focuses on four high-powered men who are “at the top of their game … until the women in their lives enter the room,” as an ABC release puts it.

Whether the general theme is more “Viva la difference!” or battle of the sexes or post-feminist gender-blindness remains to be seen as the season and the shows unfold.

Industry analyst Shari Anne Brill of Carat USA says the target audience for many of these shows are women, who make up the majority of the TV audience and favor relationship and friendship stories. Whether they’ll like the female characters they see is an open question, she said.

“For years, when men were behind the camera, women were really ditsy. Now you have female leads playing superheroes,” Brill said. Or a super businesswoman, like Lucy Liu’s character in “Cashmere Mafia,” who may represent progress. Or not.

“What if it’s all backstabbing – are they going to be like the women in `Melrose Place’?” Brill said.

So how will men be portrayed?

In “Big Shots,” a lead character laments in the pilot episode: “Men – we’re the new women.”

It’s fair to look to network executives for clues about how the male-female dynamic will be depicted. After all, they ultimately decide what goes on the air, how it plays and whether it stays.

Consider this potentially meaningful scene from the July meeting of the Television Critics Association, at which networks showcase upcoming programs and reporters get the chance to question both the suits and stars.

Ben Silverman, a hotshot producer recently installed as cochairman of NBC Entertainment after the ouster of programming chief Kevin Reilly, had told reporters that since he was new at the company he wasn’t involved in NBC’s decision to dump Reilly.

That provoked Stephen McPherson, ABC Entertainment president and, it just so happens, a friend of Reilly’s since they were fraternity brothers at Cornell. McPherson vented to reporters during ABC’s subsequent turn at the meeting, noting that Reilly had championed the Silverman-produced “The Office” at NBC.

“Then to stand up and say, `I just got here (to NBC),'” McPherson scoffed. His advice to Silverman: “Be a man.”

This, it should be noted, was uttered in the plush surroundings of a Beverly Hills hotel and, with Silverman safely back at NBC headquarters, little chance of an immediate brawl. But there was a whiff of macho in the air – maybe the scent du jour.

Maybe it was another kind of bravado; let’s call it “femacho.” After all, ABC has more than its share of what look like female empowerment shows.

But it may not matter who’s in charge.

During the critics’ meeting, CW entertainment President Dawn Ostroff was asked to account for what some see as unenlightened reality shows, including “Farmer Wants a Wife,” “America’s Next Top Model,” and “Crowned,” about motherdaughter teams vying, not nicely, for a beauty title.

“Are you proud of the vision of that this presents to young women?” she was asked.

“You know what? I am,” Ostroff replied.