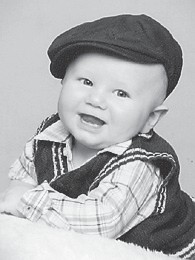 Jonathan David Williamson is the son of Sandra and Jessie Williamson. He is the grandson of Tammy and Rodney Allen.

Hello everyone. Hope you are all doing well and having a good week.

We are sure having great weather. It’s feeling like fall and the trees are starting to change.

I have been trying to get some things done that I’ve been letting go. I told my son Larry I had a working spell. He said, “You better see a doctor.” I don’t think I will. It feels good and I hope it lasts until I can get caught up.

I want to offer my sympathy to Rose Ballard and her family in the death of her brother, Richmond Hall. I liked his wife Wanda the first time I saw her. I went to the funeral and when I found out that she was a Halcomb, I asked her about her family as my grandmother was also a Halcomb.

It turned out that her grandfather was Willie Halcomb, a brother of my grandmother, so we are cousins. We had lots to talk about. She even remembered my great-aunt, Lydia Garrett. She was her greataunt also. It’s a small world

It was good seeing all the people at the funeral that I hadn’t seen in awhile, the pastor Bro. Lester Boggs and wife; the former pastor Bro. Cassell Boggs and wife Opal; Almo Tindle; Eva-Dean and Glenn Webb; Nell Fields and Bernetta and Mike Lucas.

Mike was the song leader, and he did real well. I enjoyed hearing Willie Perry sing and all the church singers.

I missed Dorothy Tackett being there. She had a doctor’s appointment, but her sister Linda Hall was there and I sat with her so we cold talk.

I hope Rose can come back soon. I spent a lot of time with her at the church. I worried about her leaving right after the funeral. She was tired from staying all night at the church and having to drive all the way to Harrison, Oh. She did call and say she made it home.

Our church is all excited about Bro. David Miller coming to our church through Sept. 21. He lives in Dayton, Oh., and pastors a church there. He’s a longtime friend. Our pastor Bro. John Conn and all the congregation invite everyone to come and hear him. He’s also a great singer.

We have a lot of sick folks who needs everyone’s prayer: Shirley Niece, Aggie and Charlie Hatton, Bro. Earnest Brock and wife Kathleen, and my niece Katie Tyree.

Larry Hatton and Kevin Day were real pleased that their team won the ballgame at Louisa last Friday night, and I’m sure Missy and Randy Tyree were overjoyed with their son Chris Tyree at how well he played.

I don’t know anything about football. I never went to a game, but I listen to it on the radio to hear Larry and Kevin get excited, and Larry Day, Kevin’s son, gets exited too. He goes with them to help them.

Our sympathy gores out to Nanetta Dingus, who lost her mother last Friday. I don’t know her name, but I think she lived at Millstone.

I’ve been watching the Government Station on the horse trail on Pine Mountain.

I think it’s going to be good for our people. I got to see a lot of my family on it: my brother, Bobby Ray Howard; my grandson, Jamie Hatton; and my nephew, James Earl Pennington.

He’s letting them use his property and is glad to do so. He’s a ‘good old boy,’ and we love him. He lets us use it for our Howard family reunions.

My son Billy Hatton and wife Sandra went to their lake house this weekend. We went to Pine Mountain Grill and had their catfish dinner before they left. It was really good! I recommend it.

I think it’s time to quit writing. I’ve been blacking out misspelled words and that’s a sign to quit.

So may God bless all of you, and I hope I get some really good news for next week.

Try to go to church somewhere this week. I will be going to our revival and looking forward to it.