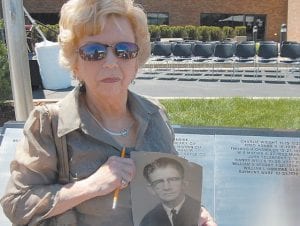 A former Letcher County sheriff and two deputy sheriffs who died in the line of duty were among 28 fallen police officers whose names were added this week to the Kentucky Law Enforcement Memorial in Richmond. 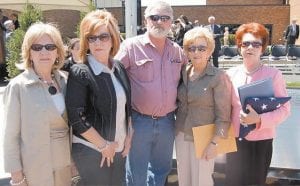 The three Letcher County officers named to the memorial are William S. Wright, Jason Andrew Webb and Raymond ‘Tip" Warf. Their names will also be added to the National Law Enforcement Officers Memorial in Washington, D.C., on May 13.

Five of Warf’s children attended the memorial ceremony Monday on the campus of Eastern Kentucky University in Richmond.

"I don’t think words can describe how I felt," said daughter Ann Estep. "It was very meaningful to all of us. I felt like he was looking down on us from heaven."

Estep said that although it took 39 years for her father to be honored, she and her siblings were glad they got to be present for the unveiling of Warf’s name on the memorial.

"It brought back all the memories of our father and we teared up," said Estep. "You don’t realize how police lay their lives on the line for all of us. My daddy would have been proud."

Estep said her father worked in the coal mines for 40 years before deciding to run for sheriff.

"He went up and down every hollow and shook everyone’s hand," said Estep. "Everyone loved him and he won the election."

Estep said that during the 10 months Warf served as sheriff, she never saw him out of uniform.

"He wanted to help clean up the county," said Estep. "He was so proud and we are so proud of him."

Estep said her father died after 1970, during which a group of more than 20 people had gathered to do damage to a bridge. After Warf confronted the group he began having chest pains. Deputy Sheriff Frank Tackitt rushed Warf to the hospital, where he died.

Warf ‘s wife, Macie Warf, was appointed by the governor to serve as sheriff until the next general election.

"She was ready to go out with the deputies carrying a gun," said Estep.

Benjamin F. Luntz was also present at Monday’s ceremony. His grandfather, William S. Wright, was murdered by two members of the Ku Klux Klan on January 30, 1900. Luntz said his grandfather, who was a magistrate and a school trustee, did not approve of things the KKK was doing in the county.

Luntz said that in 1897, KKK members burned a church at Millstone and were whipping people.

"My grandfather tried to get the local politicians to do something and they were understandably scared," said Luntz.

Luntz said Wright ran for county judge in 1899 and lost by a small vote because he was a Democrat in a Republican county.

"By the surprise of everyone he almost won," said Luntz.

Luntz said KKK members burned down his grandfather’s mill and barn at Seco in July 1899, and also tried to burn down his house. He said his grandfather angered the KKK again in November 1899 after learning the organization was going to raid homes at Payne Gap.

"He set up a trap near Daniel’s Hill at Kona near Martha Jane Potter Elementary School," said Luntz. "When they came back from whipping women, a big battle broke out. A few were injured, some (were) captured and a horse or two were killed. That got them angered."

Wright, then 44, was deputized after the battle but was killed almost three months later.

"My grandfather wanted to prevent these beatings," said Luntz. "Those beatings were brutal. They about beat those women to death."

On January 30, 1900, Luntz said Wright was going to check on his lumberyard near Haymond when two militia members told him that the KKK was going to leave the county and that one of the members wanted to make peace with Wright.

"He was set up," said Luntz. "They shot him with a crossfire. It was very brutal and gory. My father (Dr. B.F. Wright) was nine years old, ran up there and saw him dead. Just a horrible situation. Two bullets hit him, but he was shot at multiple times."

Luntz said the murder took place at Whitaker, a community located between Kona and Neon.

Wright’s son, William Wright, had his name added to the national police memorial in 2004. The younger Wright was only 18 years old when he was murdered in April 1901 when he and his partner were ambushed by two suspects who were being sought for murder.

Luntz said it was easier to prove that the younger Wright was a police officer, but that he finally was able to find the documentation showing that his grandfather was a deputy sheriff.

"It means a great deal to have them both remembered," said Luntz. "My uncle and grandfather sacrificed their lives going against evil. (My grandfather) had to do it. He was morally obligated."

The second fallen deputy who is being honored is Jason Andrew Webb, died on December 24, 1931 after he was ambushed and killed near his home by Urias Polly, who Webb had arrested a few days prior on a whiskey charge.

Letcher County Sheriff Danny Webb, whose office researched newspaper archives and courthouse records, said it was an honor to participate in the process of having the officers recognized and honored for their actions and their service to the citizens of Letcher County.

Webb said he hopes family members of the fallen officers will receive some closure after the grief they suffered from the loss of their loved ones.

Webb and members of Warf’s family plan to attend the vigil for the officers when their names are revealed on the national memorial on May 13.

The names of the 28 fallen officers added to the statewide memorial this week brings to 530 the number of inscribed names remembering Kentucky’s slain police and law enforcement personnel. That includes two officers whose deaths occurred last year and 26 who died dating back to the 19th century.

Howard died of a heart attack after arresting a suspect who was wanted on a warrant.

The 28 names are among the names of 387 fallen officers being added to the national memorial in Washington.