Has performed with Beyonce, Ralph Stanley, The Who and Coldplay 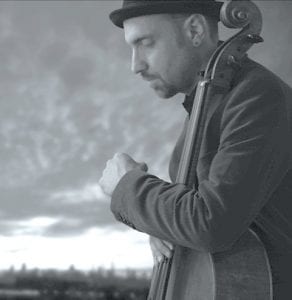 Famed cellist, pianist and composer Dave Eggar will perform in concert in Whitesburg early next week in support of his new album Kingston Morning,
a portion of which was recorded in Big Stone Gap, Va., with bluegrass music legend Dr. Ralph Stanley.

A musical prodigy as a child, Eggar has worked with artist ranging in style from rockers The Who and Coldplay to soprano Kathleen Battle and pop star Beyonce. He will perform at Summit City in Whitesburg on Monday, Dec. 6 at 7:30 p.m.

Eggar began playing the cello and piano at age three. By the age of seven, he had performed on Broadway and with the Metropolitan Opera in New York City. Eggar debuted at Carnegie Hall in New York at the age of 15, and is a graduate of Harvard University and the Julliard School’s Doctoral Program.

Eggar’s list of awards and accomplishments includes accolades from Time Magazine, ASCAP, the National Endowment for the Arts, Sony Records Elevated Standards Award in classical music, the Geraldine Dodge & Leonard Bernstein Foundations, and at 15 was the youngest winner in the history of the Artists International Competition.