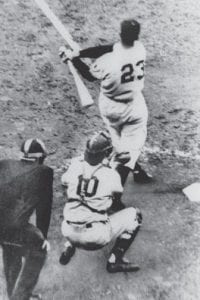 This Oct. 3, 1951 photo shows Bobby Thomson of the New York Giants hitting a home run to win the National League pennant against the Brooklyn Dodgers in the ninth ining of a baseball game at the Polo Grounds in New York. The famed home run hitter died Monday night. He was 86. (AP Photo)

Bobby Thomson, who hit the famed “Shot Heard ‘Round the World” that won the 1951 National League pennant for the New York Giants, has died. He was 86.

Thomson’s death was confirmed Tuesday by the funeral home in Savannah, Ga., that is handling the arrangements. He had been in failing health for several years and died at home nearby Monday night, funeral director Joe Wall said.

Thomson connected off Brooklyn ace Ralph Branca for a threerun homer in the bottom of the ninth inning at Polo Grounds in the decisive game of a best-ofthree playoff .

The homer and broadcaster Russ Hodges’ ecstatic call of “The Giants win the pennant!” remain one of the signature moments in major league history.