Family and friends of burn victim ‘waiting for a miracle’ 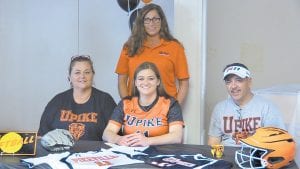 TOGETHER AGAIN — Recent University of Kentucky graduate Mercedes Boggs is returning to college as a graduate student next year to play softball at the University of Pikeville, where her former coach at Jenkins High School, April Charles is an assistant. Boggs (seated, center) signed with UPike at McRoberts Sunday as Charles (standing) and Boggs’s parents, Machelle and Kent Boggs, looked on. See story on Page 11.

No one quite knows what started the fire, but they know what fed it.

Gary Collier had just had brain surgery two days before, and when the fire burned his oxygen tubing in two, there was no more stopping it.

That was on April 18, and Collier is still in intensive care at Cabell- Huntington Hospital. A ventilator is doing his breathing for him, and he has third-degree burns over 40 percent of his body.

His daughter, Jessica Branson, said his blood pressure won’t stabilize long enough for surgery to do a tracheotomy and scrape his burns.

“He’s a fighter; he’s trying to hold on,” she said. “We’re just waiting for a miracle.”

Branson said she and her sister had taken turns cooking and taking care of their father, and she had just left about 4 p.m. that day to go to a college class. A man who was staying with her father to help take care of him had gone to pick up her little brother from school, and her father had laid down to nap in his trailer at the mouth of Johnson Fork, in the community of Hot Spot. 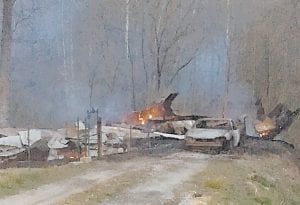 The remains of Gary Collier’s home are seen in this photo taken at Johnson Fork.

Gary Brashears, who lives across the road, was mowing grass when he saw smoke coming out of the top of the door.

“By the time I opened the gate, he opened the door and it was like everything exploded. It blew him plumb out in the yard,” Brashears said. “It was like the air was on fire.”

Brashears said his neighbor’s bandages and back brace were both on fire, but the fire on the bandages went out when he was knocked out into the yard. He tried to help with the burning back brace, but couldn’t get it fastened. Collier was able to unbuckle it himself, and Brashears threw it away from him. Brashears said he knew he had to get Collier away from the fire, but the skin was already peeling off his arms.

“It was terrible. It hurt me,” Brashears said. “I was really afraid to touch him, but it was getting bad. I had to do something.”

Brashears said he helped Collier to his feet and got him away from the fire, then drove him to Whitesburg Hospital when the ambulance didn’t arrive quickly.

When Kingscreek and Sandlick fire departments arrived, the trailer was burning hot, whipped by strong, shifting winds. Kingscreek Fire Chief Bill Meade said it was one of the worst fires he has ever seen. It caught the woods on fire, burned up a car in the driveway, and threatened to catch homes on either side on fire. Firefighters managed to save the other homes, and the Kentucky Forestry Division came to assist with the forest fire.

“ It’s amazing things turned out the way they did, or it would have burned half of Hot Spot down,” Meade said.

Collier was intubated and placed on a ventilator at Whitesburg, then flown by helicopter to the burn unit at Cabell-Huntington, Branson said.