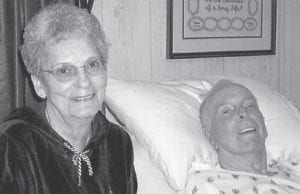 HOSPICE — The family of the late Ben Blair Jr., pictured with his wife, Mattie Caudill Blair, was assisted by Hospice of the Bluegrass – Mountain Community when he was dying. The help given by hospice allowed him to be cared for at home.

Delcie Griffaw felt overwhelmed. It was late 2007, and her father, Ben Blair Jr., then 84, of Pine Mountain Junction, was gravely ill and could no longer walk on his own. Griffaw’s mother, Mattie, meanwhile, had advancing Alzheimer’s disease. It took every bit of Griffaw’s energy to care for both of them — and still, she says, the stress “was really taking me down.”

That’s when her family doctor suggested calling in Hospice of the Bluegrass- Mountain Community.

Griffaw, 62, hesitated at first. She didn’t want to admit that her father was actually dying. “I wanted to be strong,” she says. “But I realized that I couldn’t keep doing this alone. I couldn’t even get my dad to the doctor anymore.”

Her decision to call in hospice, it turned out, was “a tremendous relief,” Griffaw now says. As her father’s heart and neurological diseases gradually worsened over the following year, Griffaw had direct access to a team of healthcare professionals: nurse, social worker, home-care aide, chaplain, bereavement counselor, volunteer, and others. All were experts in late-life care. All came to visit when she called them. And her father’s Medicare coverage paid for everything.

When Griffaw’s father died this past April, he was where he wanted to be — in his own home surrounded by family, Griffaw says, “I saw him take his last breath. He died peacefully. This wouldn’t have been possible without hospice.”

The Griffaw-Blair family is one of 79 Letcher County families served last year by Hospice of the Bluegrass- Mountain Community. And like so many, their decision to call hospice was complex. “A lot of people have the misconception that if you take hospice, you’re giving up,” says Monica Couch, director of HOB-Mountain Community. “But we’re not here to help people die. We’re here to help people live as fully as possible for as long as possible.”

She points out that patients are eligible for hospice care if they meet the following criteria:

• they have approximately six months or less to live;

• they are no longer undergoing curative medical care;

• they have a physician who will work with the hospice program.

Patients may keep their own doctors while receiving hospice care, and the emphasis is on making the patient as comfortable as possible, Couch says. “We guide families through the difficult decisions toward the end of life,” she explains. “It’s our specialty. You call in a surgeon when you need a specialist in surgery; you call in hospice when you have someone who is possibly nearing the end of their life, and they want to be comfortable in their own home.”

Couch, a nurse who has lived in Perry County all her life, has seen hospice from both sides. When both of her grandfathers were ill at the same time, she and her family called in hospice to care for them. “It was such a support,” Couch recalls. She adds, “People in the mountains need and deserve the same type of care as people get in New York City or Lexington or any other urban area.”

And they get that care from fellow eastern Kentuckians. According to Couch, most Hospice of the Bluegrass-Mountain Community employees and volunteers are from the mountain counties.

Hospice care is available to every family, Couch adds. It is covered by Medicare and most private health-insurance policies, and those who are uninsured, or unable to pay, are not turned away.

Griffaw says her family paid nothing out-of-pocket for her father’s hospice care. Medicare covered the costs of professionals, medication, equipment and other expenses related to his illness. And the care was deeply appreciated by both father and daughter.

Mr. Blair received personal care from hospice, which even included baths five times a week from a home-care aide. Griffaw received support from the entire hospice team, including social worker Lisa Marcum, who helped Griffaw deal with the emotional struggles of end-of-life care. “Lisa was here for Daddy, but she was also here for me,” Griffaw says, “and I probably needed her more.”

Griffaw, who grew up in Whitesburg and lived in London for many years, now lives and cares for Mattie in her mother’s home. Griffaw says she wouldn’t hesitate to call in hospice again. “Hospice was such a comfort as my dad was dying,” she says. “I actually find myself missing them sometimes.”

For over 30 years, Hospice of the Bluegrass has provided physical, emotional and spiritual care for terminally ill patients and their families, at home, in nursing facilities and at the Hospice Care Centers. Support and bereavement services extend to family members and anyone in the community experiencing grief. Hospice of the Bluegrass – Mountain Community is a non-profit agency providing services to patients and their families in Breathitt, Knott, Leslie, Letcher, Morgan, Perry, and Wolfe Counties. www.hospicebg.org.