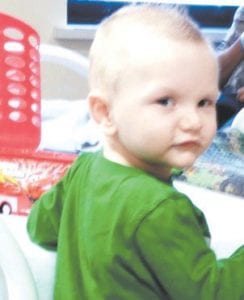 Hunter Ashley of Jenkins was barely two years old when his parents, Kimberley and Robert Ashley, began noticing that he did not seem well. When Hunter awoke in the mornings they observed that he had dried blood in his mouth. Other symptoms soon became apparent including paleness of the skin and fatigue.

They quickly made an appointment with his pediatrician, who dismissed the symptoms as cutting teeth. The conditions worsened and the family made two more visits to the same pediatrician who prescribed steroids for what was now believed to be a blood clot in the lungs. Meanwhile, Hunter’s condition worsened.

Kimberley collected a sample of the dried blood from his mouth and made an appointment with a dentist. The dentist made a quick observation that the dried blood was not typical of cutting teeth. He rushed the blood sample to the laboratory and made an appointment for Hunter with a medical doctor who was a very astute diag- nostician. The physician looked at the results of the blood work and other symptoms and immediately ordered that Hunter be flown to the University of Kentucky Medical Center in Lexington for testing. 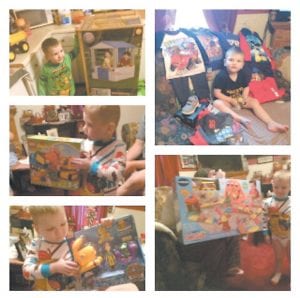 Three-year-old Hunter Ashley is seen in this photo collage provided by his family. As the three-yearold Letcher County boy continues to battle leukemia, his parents and other family members are faced with “astronomical” travel expenses from Jenkins to the University of Kentucky hospital in Lexington.

The parents were in the waiting room full of tension and hope that the hospital could make a diagnosis that would help make their baby well soon. A nurse came to the waiting room and asked if they were the parents of the little boy with leukemia. “No,” they replied, “our little boy has a lung problem.” The family was then given the bad news; Hunter had leukemia. He was admitted immediately to begin receiving chemotherapy. His first stay at U.K. was for three weeks.

When Hunter was taken to U.K. his grandparents, Larry and Kathy Rose of Jenkins, were working at the Jenkins City Park preparing for the annual Homecoming Festival in late August. They were in constant contact by cell phone with Hunter’s parents. When they received the bad news they were devastated. They dropped what they were doing and rushed to Lexington to be with Hunter and his parents.

Even though the mortality rate for leukemia patients is not good, there is hope. Hunter is taken to Lexington each month for three days to receive the chemotherapy through a port inserted in his chest. Locally, he is taken to Pikeville Medical for testing and bloodwork three times each month. In his condition he is very susceptible to infection. If any abnormality is found he is rushed to the U.K. immediately. He has been receiving treatments for more than one year now and is scheduled to continue treatments through 2018. At home Hunter has to take pills each day to keep the condition under control.

Some of the expenses of Hunter’s treatment are paid for with insurance. The administration at U.K. helped the family with their expenses through a program at the hospital. Still, the travel expenses for the family are astronomical. To defray expenses, the parents sleep in the hospital room with Hunter while he is undergoing treatments. One sleeps on a cot and one sleeps in a recliner. Locally, the family receives some help from the community.

Larry and Kathy are very active in the local fire department and it recently held a car wash to raise money and a local motorcycle group held a “Ride for Hunter” and raised over $400. Individuals, sometimes complete strangers, come forward and say, “I want to help too.”

Larry and Kathy Rose are two of the hardest working volunteers in Jenkins. On a daily basis they are busy working at the fire department and various other entities for the city of Jenkins. They have very unselfishly donated hundreds of hours this past year to helping the Kiwanis Club of Jenkins with all of its fundraisers (Larry is a member). In October, the club created a “Christmas for Hunter” fund. At each of our weekly meetings the members are asked to toss in their pocket change for the fund. It was not unusual for several to throw in a dollar or $20 or more. The fund quickly swelled to more than $300 and was presented to the family with the instructions to “buy Hunter anything and everything he wants or needs.” Hunter got to enjoy some of his gifts before Christmas but he had to return to U.K. the day after Christmas to continue his treatments.

In late November the Kiwanis Club began working on a float to enter in the Jenkins Christmas Parade the first Saturday in December. The members worked many hours preparing the float with decorations and signs that read, “Team Hunter” and “Hunter is #1”. But it wasn’t work, it was “a labor of love”.

The motto of the Kiwanis Organization has for many years been, “Kids are Priority One”. For the local club our motto is now, “Hunter Is Number One”. Our endeavor is not only to help Hunter’s family now but a commitment to continue helping Hunter as well as other projects in our community for helping kids.

Anyone who would like to help Hunter’s family can make a deposit at Community Trust Bank in Robert Ashley’s account.