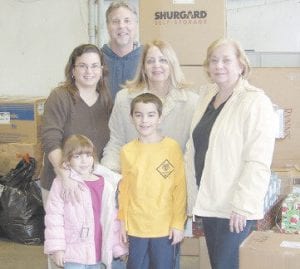 A Letcher County native who has spent the last nine years bringing Christmas gifts to needy families in the county is using this year’s excursion to help teach her grandchildren a lesson in giving.

Mary Martin Hendrian, who grew up in Race Track Hollow at Isom, received help from people in her community when she was a little girl. Her father died when she was three years old, leaving her mother to rear nine children.

Mary Hendrian moved to Michigan after she graduated high school and married, but always wanted to give back to the community that helped her when she was younger. Hendrian and her cousins, Janet and Henry Madden, created a non-profit organization, Emergency Aid for Children, to make that dream a reality.

Mary Hendrian and her husband Jim take a week off of work from their jobs in Michigan every December to deliver food, toys and furniture to Letcher County families.

“Her heart is probably 1,000 times as big as she is,” said Judy Fisher, a Letcher County native who graduated from Whitesburg High School with Mary Hendrian and came home from her job as a flight attendant to help her deliver gifts. 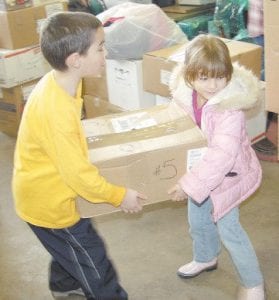 The Hendrians and the Maddens raise money throughout the year and ask their neighbors and co-workers in Michigan to help buy Christmas presents to bring to Letcher County.

They found truck drivers, Dan Benson of Holland Trucking and Shively Pierce of Yellow Freight, who volunteer their time to bring two tractor-trailer trucks full of gifts and furniture from Michigan to Kentucky. Teamsters Local Union No. 89 and Teamsters Local 651 donate gas and supplies.

The Hendrians and Maddens work closely with the Family Resource and Youth Service Centers (FRYSC) in each school in the county to make sure families are given what they need.

This week Emergency Aid for Children will help 25 families in Letcher County and five in Johnson County. They will spend each night this week traveling all over the county to meet families and encourage children to study hard and stay in school.

This year the Hendrians brought along their grandchildren, Kyle and Rachel Hendrian, to teach them about joining in and helping others.

“Christmas is not just about you getting gifts, but helping others,” said Mary Hendrian.

Jim Hendrian said he wants his grandchildren “to see the joy of giving and not receiving.”

“It’s a good life experience for them,” said Mr. Hendrian. “The whole bottom line is learning to give back.”

“That should be the lesson for everyone,” said Mrs. Hendrian.

Jim Hendrian hopes as the years pass that his grandchildren, who live in Farmington Hills, Mich., will keep giving to others and will one day want to take over their grandparents’ tradition of bringing gifts to families in need.

Eight-year-old Kyle said he does want to help others when he gets older.

His sister, Rachel, 6, explained what her grandmother has taught her through their trip to Letcher County.

“That it’s not all about you,” said Rachel. “It’s about helping other people.”