Family gathers for first time since 1907

Pictured are the descendants of Ellen and Art Flanary who gathered for a reunion the weekend of Oct. 20 in Whitesburg.

In 1907 the recent widow of Art Flanary was killed on Pert Creek, leaving her five children orphaned. They were split up, and all but the eldest (Nannie) were taken in by Ellen’s sisters on Indian Creek (Pound, Va). Flora, who was only two when her mother was killed, was twelve years old before she knew she had any siblings.

The eldest boy, Robert, was ten when his mother was killed. He settled in Potters Fork, married Goldie Newsome, and had three children live to adulthood. George and John (seven and five when their mother was killed) left Letcher County as teenagers, to join the Army and fight in World War I. When they returned from the war, they settled in Washington State, where their descendants still live. Flora, the youngest, married Dan Wright and settled in Pine Creek, and together they had twelve children. 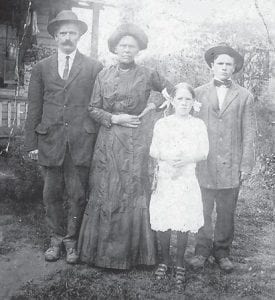 Pictured is Flora Flanary, at age six or seven, with her Aunt Malvina, Malvina’s husband Francisco, and an orphan boy named Edd whom they took in.

It was a wonderful union of cousins, filled with stories and old photos. We feel confident our ancestors were smiling down on the gathering.

CANE Kitchen catered the event, which was held on College Hill at the former Whitesburg High School.