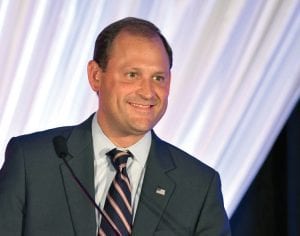 As a child, Andy Barr watched his sister battle juvenile rheumatoid arthritis. She spent her childhood in and out of hospitals, undergoing at least 25 surgeries while his parents struggled to find affordable insurance coverage.

Beginning in high school, Amy McGrath watched her parents battle cancer. Her mother had a mastectomy and her father had disfiguring surgery. She said her mother’s background as a doctor is the only thing that kept insurance companies from fleecing them.

Now Barr and McGrath are running for Congress against each other in Kentucky in one of the most competitive and expen- sive races in the country. But their families’ struggles with insurance companies has led them to different places. Whoever wins could help determine which party controls Congress for the final two years of President Donald Trump’s term and shape health policy for millions of Americans.

“It’s the No. 1 issue,” said McGrath, a Democrat and retired Marine fighter pilot. “People are worried.” 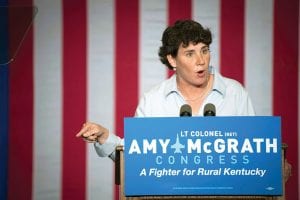 Barr, a Republican first elected in 2012, wants to end Kentucky’s expanded Medicaid coverage for lowincome adults and instead give them refundable tax credits to help them pay for private insurance plans. McGrath wants to keep the Medicaid expansion while broadening other health programs. She’d like to let people buy into Medicare before they turn 65 and wants the government to offer health plans to the public, which she says would keep prices down by competing with private insurers and giving people more options.

The public option did not make it into the Affordable Care Act. But it did include nonprofit health care cooperatives to compete with private insurers. But many of those co-ops, including one in Kentucky, failed despite millions of dollars in loans from taxpayers. And Barr says the Medicare buy in plan would just add to the debt of a program already near insolvency.

The debate gives voters in the state’s 6th congressional district a fresh chance to weigh in on what has been a deep partisan divide over how effective the Medicaid expansion has been in Kentucky. More than 400,000 people have gotten coverage through the program, reducing Kentucky’s uninsured rate and paying for drug treatment programs amid a devastating opioid epidemic. But it’s been expensive, and the state still lags other states in key health indicators.

Amy McGrath’s mother, Marianne McGrath, was diagnosed with breast cancer in her 50s when Amy was in high school. She had a mastectomy and has been cancer free for 25 years. But Amy’s father, Donald McGrath, had a tumor in his face that required surgery, disfiguring him and preventing him from eating or talking. He struggled with health issues for 14 years before his death earlier this year.

Amy McGrath said watching her mother battle insurance companies over the years convinced her “the system is really broken.” But she says the Affordable Care Act is “a step in the right direction.”

“I can’t tell you how many people have come up to me and said, ‘Hey, the Affordable Care Act saved my life’,” she said. “The answer is to fix it, not to throw it away and basically throw people with pre-existing conditions under the bus to make it too hard for them.”

Barr’s older sister was diagnosed with juvenile rheumatoid arthritis as a child, which led to extensive surgeries and treatment. His father was an accountant, and most of his clients were doctors. He said his parents got insurance with a small group plan through his father’s business, but “it wasn’t cheap.” The experience in hospitals led his mother to become an Episcopal deacon and hospital chaplain.

Barr’s sister is an Episcopal priest now living in the northeast United States. Through his campaign, she declined to be interviewed for this story and asked that her name not be used. But Barr has described her situation publicly, including touting his membership in the Congressional Arthritis Caucus.

“Our family, personally, knows how difficult it is to obtain affordable insurance when you have a problem like that,” he said.

But he says expanding Medicaid is not the answer, even though many of the 400,000 people included in Kentucky’s expanded Medicaid program live in his district. Barr said it’s “a good thing” that more people have coverage but questioned the quality of that coverage. Medicaid, he said, “is a waiting line.”

“Medicaid is terrible. Medicaid is the worst kind of coverage you can get. I want less people on Medicaid and more people on private commercial insurance with a subsidy to buy it or a tax credit to buy it,” he said.

Critics, including the Kaiser Family Foundation, say the tax credits offered in the Republican plan would be smaller than what’s currently available.

Barr noted the plan he voted for in the House would have protected people with pre-existing conditions, like his sister, from losing their coverage. That’s true, but it would have also allowed health insurance companies to charge older adults five times more than younger adults instead of three times as much under the Affordable Care Act, according to Dustin Pugel, a research and policy associate for the Kentucky Center for Economic Policy.

“The older you get, the more likely it is you were going to have a pre-existing condition,” he said. “You’ve lived more life.”