Family itches to be rid of pinworms 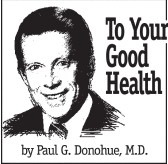 DEAR DR. DONOHUE: Two of my children, a boy in the second grade and a girl in kindergarten, have been scratching their behinds for a week. I mentioned this to my neighbor, and she said they probably have pinworms. That made me sick to my stomach.

How do I know for sure? If they have them, where did they come from? I have two other children. Should they, my husband and I also be treated? I am really upset. — A.D.

ANSWER: Calm down. Pinworms are easily treated. They’re harmless and don’t indicate a lack of cleanliness in your home. They’re found worldwide, and no stratum of society is immune to infection with them.

Transmission takes place when pinworm eggs find their way into another person’s mouth. Scratching embeds eggs under the fingernails. The majority of infections take place when an adult or child with pinworm eggs under his or her nails or on his or her hands touches another, and that person then transfers them to the mouth. In the digestive tract, an adult pinworm emerges in a month to six weeks. Infected people perpetuate the cycle of infection in their own bodies by transmitting eggs to their mouths.

The mature female pinworm travels down the digestive tract at night and deposits her eggs at or just outside the anus. A female lays more than 11,000 eggs. They’re the cause of intense itching.

The diagnosis is made by finding the worm or its eggs. The best time to look is first thing in the morning, before the child has washed. A pinworm looks like a thin, white thread, about fourtenths of an inch (1 cm) long. Make the search with a flashlight and a magnifying glass. Scotch tape, fixed to a tongue depressor or a similar object and pressed against the skin near the anus, traps eggs, which the doctor can see with a microscope. The tape is fixed to the depressor with the sticky side on the outside. The ends of the tape are folded over to adhere to the two sides of the depressor. Mebendazole and albendazole do a good job in getting rid of the worms. All family members should be treated.