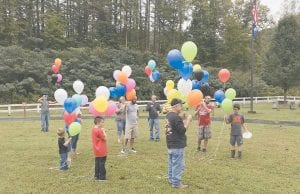 Floyd Lowe, the older brother of 2016 murder victim Michael Lowe, was surrounded by other family members Sunday as they prepared to release 52 balloons in honor of what would have been Michael’s 52nd birthday. The event was held at River Park in Whitesburg.

Nearly two years after Michael Lowe was found brutally murdered in the Burdine community of Jenkins, family members continue to hope the case will be solved sometime soon.

Lowe, who had just recently turned 50, was stabbed to death inside his apartment in the Mountain Breeze complex, apparently on the morning of October 4, 2016. Officials said at the time that robbery did not appear to be a motive.

During a gathering held Sunday at River Park in Whitesburg to honor Lowe on what would have been his 52nd birthday, family members said they have their own suspicions about who committed the murder.

“Everybody’s got their own theories, but innocent until proven guilty,” said Floyd Lowe, Michael Lowe’s brother, as he and other family members prepared to release 52 multi-colored balloons into the sky to mark the occasion.

Floyd Lowe, of Smoot Creek, is certain that someone at Mountain Breeze knows more about the murder than he or she has told authorities.

“Somebody knows something — it happened in daylight,” he said, adding that he believes that whoever committed the murder had to suffer injuries that someone else knows about.

“Someone got hurt that day,” Lowe said. “You could see where he (Michael) had fought for his life.”

Floyd Lowe’s wife, Christine, remains hopeful that at least one person who knows the identity of the killer will come forward and tell what he or she knows.

“You’ve got two people — the person who did it and the person they told,” she said.

Christine Lowe organized Sunday’s memorial. She said she chose the multiple colors of balloons for release because Michael Lowe was colorblind and at the time of his death had been hoping to save enough money to buy special eyeglasses that would have enabled him to see colors more accurately.

“He never got the chance to buy them,” she said.

Mrs. Lowe said the length of the investigation has “been hard because it’s been two years,” but said she and other family members believe that investigators have been doing “everything their power to get as much evidence as they can” despite the large caseloads they carry.

“I feel for them,” Mrs. Lowe said of the two Kentucky State Police detectives who have been involved in the investigation. “The guy who has the case now has over 200 other cases to work on, including car wrecks. I don’t blame the officers. They’re overwhelmed.”

The Lowes say they still don’t know the full extent of the injuries suffered by Michael Lowe because their requests for a copy of the autopsy report have denied by county and state officials.

“We wanted some explanation,”

Christine Lowe said. “We asked for the autopsy and we didn’t get it. That burned my ham on both sides; it’s very disheartening.” Mrs. Lowe said that while viewing the autopsy report may “seem morbid to some” people it would give the family “the only type of closure we can get until the person who did it is caught.”

At Sunday’s memorial, Michael Lowe’s family members remembered him as a man who was always willing to help others, especially when it came to helping them fix a computer or a cellular phone.

“He would go out of his way to help anyone,” said Floyd Lowe. “That’s why I don’t understand why anyone would do that to him.”

Michael Lowe’s sister, Gladys Bryant, found his body on that October afternoon after she went to check on him when she became concerned that he never called to tell her that a meatloaf he had promised to cook was ready to eat. Ms. Bryant also lived in Mountain Breeze, but in a separate apartment.

“He was making meatloaf that day and Gladys never got called to supper,” Floyd Lowe said.

Family members believe Michael Lowe had just driven up to his apartment shortly before he was murdered, noting that he left the pack of cigarettes he was smoking and the soft drink he was drinking in the car.

Meanwhile, they wait for someone who saw something on the day of the murder to come forward with information to help state police break the case.

“What I don’t understand and I’ll never understand is it was daytime,” Christine Lowe said, referring to the lack of anyone who admits to seeing anything.