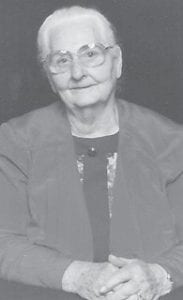 As I sit here tonight and try to write, I struggle to find words. Our family has suffered a tremendous loss; my precious grandma, Lucy Halcomb Blair, passed away at 9:40 am on April 9, 2011 at her home, surrounded by her family.

Grandma Lucy was born on November 30, 1921, being 89 years, 4 months, and 10 days of age at the time of her passing. She was the daughter of the late John and Rebecca Shepherd Halcomb and the widow of Clarence Blair.

She was preceded in death by a son, Onis Blair; two daughters, Lola Crawford and Hazel Banks; two brothers, William Halcomb and Charles Halcomb; and a sister, Sylvania Lucas.

Grandma Lucy joined the church on June 19, 1994. Her funeral was on Tuesday, April 12, 2011 at the Dixon Memorial Church with David Jent, Allen Whitaker, Roger Whitaker, Shawn Henderson and others offi ciating. Burial followed in the Clarence Blair Cemetery behind her home at Jeremiah.

Even though my heart is heavy, I can’t force myself to be sad that Grandma has passed on, I am just relieved that she no long has to endure pain and suffering. I will miss her every day of my life nonetheless.

The poem below was written on a picture that we kids bought for Mom, Syl- vania Whitaker. This poem gave me a moment of peace when I read it, so I will share it with you.

“ If you could see me now, you wouldn’t shed a tear though you may not understand why I’m no longer there. Remember my spirit that is the real me because I’m still very much alive, I’ve just been set free. Oh, if you could only see! I have beheld our Father’s face and I’ve touched my Savior’s hand. All of Heavens angels rejoiced as I entered the Promised Land. Beyond the gates of pearl I’ve walked on the golden streets. I’ve touched the walls of jasper and dipped my foot in the crystal sea. The beauty is beyond words and nothing could compare, I’ve even seen your mansion and someday I’ll meet you there. Let Jesus be your guide because His Word will show you the way! So please don’t cry because we will meet again someday.”

Our family would like to thank each and every one of you who sent food, drinks, cards, flowers, gifts, gave us a kind word or sent up a prayer. We will be forever grateful. Please continue to pray for our family as we struggle through this tough time.

Although our family is devastated, we also have much to be thankful for, especially the upcoming arrival of Kylee Faith Gibson.

My niece Deidra and her husband Sammy are expecting their daughter to grace us with her presence somewhere between mid May and early June. Family and friends held a baby shower for them on April 17. There was a very large turnout and Deidra received many beautiful things for Kylee. We would like to thank everyone for taking the time to come out and celebrate this special time with us. Blair Branch

Another blessing that I hold close to my heart right now is the Heart Light Youth Mentoring Program, which is a ministry of Revelation Ranch at Calvary Campus. My oldest son Bailey participates in this program and it has truly been beneficial for him. His grades at school have improved as well as his attitude. Heart Light offers an extended family environment, and a platform for building a closer relationship with God. The kids come at least two times a week after school and engage in homework time, devotions, team building, horseback riding, project planning and implementation, meals, mentoring, and fellowship. Peri and Ricardo Pardo run Revelation Ranch and they are wonderful people who have taken Bailey under their wing. He loves being a part of this “family”. I am forever grateful to them.

There is another stomach bug floating around and wreaking havoc on everyone. Make sure to remind your kids to wash their hands. It has made its way through my brother Wade’s family and now has hit my sister Missy’s family. I’m praying it misses us this time.

Scratch, scratch, scratch. That is what Bailey had been doing lately. He was covered in poison ivy! He even had it on his face. I’m not sure where he got into it, but obviously he had rolled in the stuff. Michael took him to the doctor as soon as it showed up on him, but he was already covered. They gave him a prednisone shot and liquid prednisone as well as some cream to use for a week. Michael said holding Bai still long enough to give him the shot was like wrestling a wild boar, but it had to be done. The poor guy was in agony. Thankfully he is doing well now and not itching anymore. You can still see the red places, but hopefully those will be gone soon too. Michael and I gave him a “class” on what poison ivy looks like so that he can avoid it next time.

Dalton has been sick this past week. Thankfully it isn’t anything too serious. Just a sinus infection, but that is enough to make him whiny and miserable.

Roger Whitaker is healing after the removal of a cyst on his leg. He had to visit the ER weekend before last because the incision on his leg was bleeding. It had to be cleaned and glued back together.

Charity Whitaker said she has been doing better. If I am not mistaken, I believe she told me she has gained 10 pounds back after a change in her medication. I know she looks better than the last time I saw her. She had fallen away to just skin and bones.

Jamie Collins had to spend several nights in ICU at WARH a couple weeks ago. She had cellulitis in her elbow and it caused her heart rate to go sky high. She is home and doing better now, thankfully.

I saw David Smith at Food City a week or so ago and asked him about his wife, Loraine. I was saddened to hear that she isn’t doing well.

Jodi Sands recently found out she has a type of breast cancer called “phyllodes” and very thankfully, not the aggressive type. It was just the tumor itself. She had a lumpectomy to remove the entire tumor and surrounding tissue. She shouldn’t have any more problems with it and won‘t have to undergo any chemo or anything like that. Her sister Jocelyn Watts said she is in some pain from the surgery, but is recovering and doing great.

My sister, Opal Jent, says Bull Creek Old Regular Baptist Church would like to apologize for canceling its services on Sunday, April 17. The church’s heat pump went out and they were unable to fix it in time.

Ramie Adams and Chris Hensley were married on April 4. Ramie is the youngest daughter of Rame and Lynn Adams. Congratulations, you two. I hope you have a long happy life together.

Krystal and Phillip Albers will celebrate their wedding anniversary on April 25. I hope you have a wonderful day and are blessed with many more love-filled years together.

If I have left anyone or anything out, just let me know and I will be glad to get you next time. I hope everyone has a healthy and happy week

If you would like to contact me, feel free to give me a call or you may email me at alanacouch@hotmail.com.