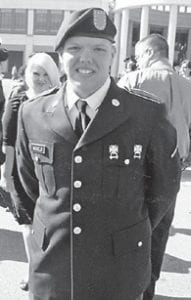 Army Pvt. Eric Nickels of Thornton completed basic training on April 12 at Fort Benning, Ga. He is the son of Greg and Rene Hurt and the brother of Heather Hurt. He will celebrate his 19th birthday at Fort Sill, Okla., where he is completing his advanced individual training.

Clester and I have had a marvelous weekend.

Amanda and her cousin Gina Dotson went shopping in Norton and had a lot of fun. Sharon and Rylee made two cakes and a lot of cupcakes. Rylee did all the decorating. She is five and is a really good decorator.

Edsel, Carol and Kaylee Baker visited on Saturday afternoon. The girls had so much fun. They missed Brooklynn Lucas. We tried to find her.

Also stopping by was Annette Bates Isaacs. We enjoyed being together even though it was a short visit.

Ann Thomas had a procedure done last Wednesday at the hospital and so did Clester. Brenda Richardson, Effort and Yvonne Tackett were with Ann so we had a good visit.

Ed Mullins was a patient at ARH for a few days. I talked to his wife Leeanna and she was hoping he would be going home soon. I sure hope he continues to improve.

Sympathy to the family of Lloyd Brown. He was one of the nicest men in the county, and always had a kind word for everyone.

Bill Blair called and we had a nice visit by phone. Bill knows my cousin Amanda and her husband Vince Roberts. Also the girl, Maureen Mather of British Columbia, is a cousin to Bill. It’s a small world.

Joann Hall and her sisters have returned home from a nice vacation in Myrtle Beach.

Brandon Jent, a son of Regina Quillen, and a grandson of Maxine Quillen and the late Jackie Von Quillen, has been accepted in the ISA Chilian Study Abroad Program. He will be leaving for his stay in July.

Brandon recently presented research at the prestigious International SECOL (Southeast Conference of Linguistics) with Kristopher Adams from Lexington. They were the only two undergraduates from U.K. presenting at the conference; moreover it’s very rare for any undergraduate student to have research paper abstracts accepted for presentation at the conference.

Research includes analysis for dialectal features in the broadcast of newscasters from WYKT and WYMT. They were invited to present their research again at the University Aswale Undergraduate Research Symposium, in which several linguistic students from the university will be demonstrating the research effort to the university faculty and the students.

We are proud of Brandon and wish him the best of luck with his studies. Letcher County has been well represented.

Maxine and Imogene went to Hemphill Friday night and danced the night away.

Sam Wright brought a cake for S.T.’s birthday. On Saturday a big birthday bash was held for S.T. at the Mexican restaurant in Whitesburg. Maxine attended and said there was a big crowd and a good time was had by all. Happy birthday, S.T., and we hope you have many more.

Prayers for Geneva and Danny Akemon, Melanie Blair, Ralph Caudill, Clester Isaacs and all who are sick.